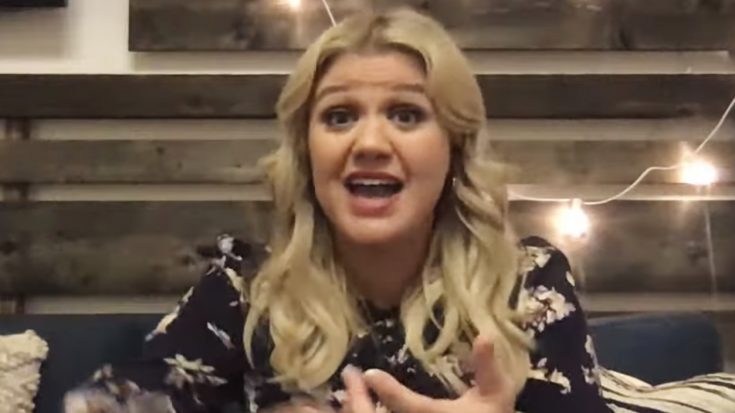 To get ready for her talk show, Kelly Clarkson did a live Q&A with her fans on YouTube before the show began airing in September 2019. During one segment, her team was giving her some popular phrases and having her guess what they meant.

For her final task, she had to guess what the term “Farm Emo” meant. She guessed, “a very sad country person, where their farm isn’t working out.”

Clarkson was horribly mistaken because she was informed that “Farm Emo” is slang for “country music.”

To further prove her point. Take a listen to the song that has held the top spot on Billboard‘s Hot Country Songs chart for the past three weeks, “The Git Up” by Blanco Brown.

Clarkson continued, “When I started to do country, they were like ‘Oh, you’re pop. You can’t do country, you’re not country enough.’ And I’m like ‘I’m sorry, let me show you this list of the Top 20,’ which by the way did not include one female. It’s fine. But country music doesn’t sound country anymore.”

Carrie Underwood is currently the only female sitting in the Top 20, but it’s taken her weeks to even break through. In fact, of the entire Top 50, only six different female names appear. See them below.

Continuing her slam on the industry, she said, “I’m not even in the country music industry, I’m not trying to get played on country radio. I just love country music, okay? So why don’t we all just start putting our 80s and 90s records on, okay? And let’s figure out, what is country music? What is the sound we like again? Because it’s not what you’re playing on the radio. I’m mad about it. That’s right. Because I’m a fan, and I go to shows. And I don’t want to feel like I’m at some weird rock show where they start rapping. What? Why are you rapping in country music? I don’t understand it. I get ‘let’s be progressive.’ I get it. I’m all about being [progressive.] But come on. And it’s not just one. It’s like a lot of y’all. And it’s bad. Sorry.”

She also claimed that she knows most of the country singers agree with her but are too afraid to say anything because it’ll affect their radio play.

“They also don’t play anyone with boobs!” referring to radio seemingly shutting out women.

This @kellyclarkson rant about country music is EVERYTHING. pic.twitter.com/EH5FTZp79C

Watch the entire Q&A below.