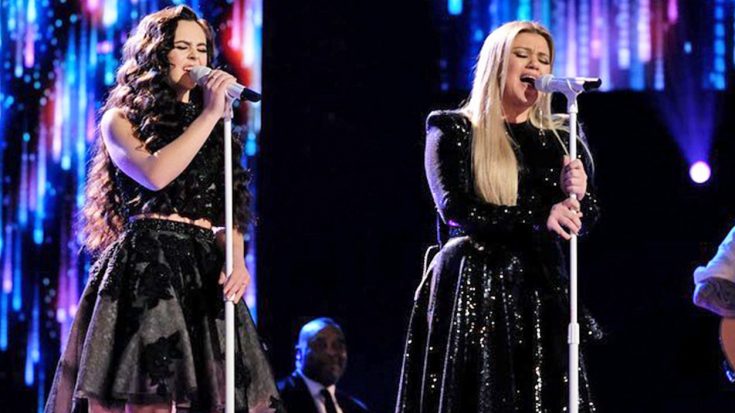 As season 15 of The Voice comes to a close, the competitors went head to head with some unforgettable final performances. Three out of the four coaches had talents from their team make it to the final round, where the coaches performed alongside them. Although Blake Shelton is taking the lead by having two of his team members in the finale – Kirk Jay and Chris Kroeze – Kelly Clarkson and her young prodigy, Chevel Shepherd put on a phenomenal duet.

are y’all ready for monday? 😉 i’m super super excited and i hope y’all are too!

16-year old Shepherd has been stealing the hearts of Voice fans from her very first audition. Thanks to her undeniable talent, she received a three-chair turn during her blind audition of “If I Die Young.” A heartfelt moment surprised the coaches and the crowd when the young teen picked Clarkson’s team over Shelton’s after showing admiration for the “Honey Bee” singer. Her southern twang alongside her bubbly personality has now earned her a spot in the Top 4.

For one of her final performances, Shepherd took the stage alongside her mentor, Clarkson. The two performed their own rendition of The Judds’ “Rockin’ with the Rhythm of the Rain.” Country music duo The Judds released the famous tune in May of 1986 during the peak of their career. The song hit No. 1 and spent twelve weeks on the country chart. The five-time Grammy-award winning duo went on to be one of country music’s most successful acts.

Circa 1984…accepting the CMA Horizon Award. We can't believe it's been over 33 years! What a defining moment for…

Rockin’ With The Rhythm Of Chevel

Shepherd and Clarkson took the stage standing side by side. Shepherd started off the duet while Clarkson admired her young talent before joining in. As Shepherd sang the higher harmonies, Clarkson carried along the back vocals. The young talent showed off her yodel during little snippets of the tune. During the bridge, the two brought their voices together for some soulful harmonies.

The performance showcased both Clarkson and Shepherd’s powerhouse vocals as they perfected their pitches. Shepherd has the voice, attitude, and looks of a young Loretta Lynn and fans everywhere are loving it.

Tonight The Voice winner will be announced as all the votes are in. Good luck to the top 4 contestants and a big round of applause for all the amazing performances they’ve put on!