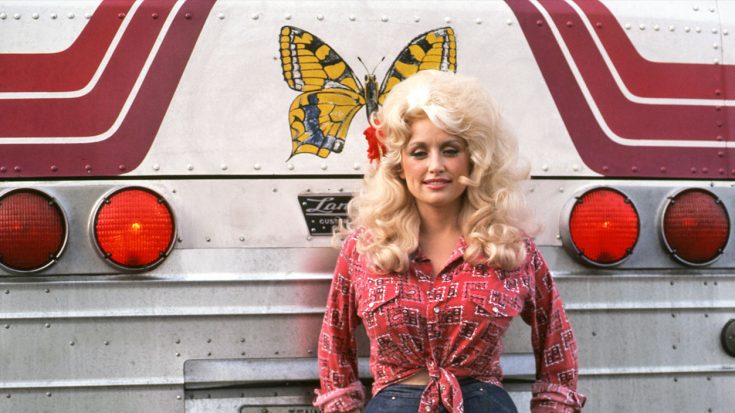 Dolly Parton has been making a name for herself since the late 1960s. With her golden vocals and loyal fan base, the blonde bombshell found herself in the spotlight of fame quickly. With the release of several hit singles and albums, her career has always had fans begging for tours and travel. Although Dolly loves to travel, she admits flying isn’t her favorite. The only solution? Her glammed-out tour bus.

Always be a diamond, even in a rhinestone world. ✨

In the summer of 2011, Dolly started a vlog called Dolly Parton Tour TV. The special was 15 episodes long featuring behind the scenes into her tour life. The series showcased Dolly on stage and off stage with personal interviews. The most popular episode from her series was Episode 13: Tour Bus. Fans finally got to see an inside look into Dolly’s “Gypsy Wagon.”

Dolly’s Home Away From Home

Dolly takes us on a tour of her bus explaining her reasoning behind everything that resides inside the gigantic RV. Inside her souped-up ride are a couple of bunk beds that she has for when guests come on board, such as her nieces and nephews. Dolly admits that the back part of the bus is where it becomes her own though.

“The very back of the bus is just custom made for me,” she said.

Dolly gave the low-down of what her special section of the RV holds. She has her own bathroom that has a little bathtub. In her room, she has her TVs, a shelf specifically just for her wigs, and closets for her show clothes. The video shows a close-up into some of the intimate details the country icon has too. With paintings drawn onto the wall and decorated mirrors, Dolly definitely lives a life of luxury on the road!

Dolly’s wardrobe designer, Steve Summers, spoke about the amazing memories the singer has shared on this bus as well.

“This is the bus that she takes to tour all over the United States. It has had some terrific songs written in it. She wrote all the music for the 9 to 5 Musical on this bus and the Backwards Barbie album.”

Watch the video below to see the full ins and outs of Dolly’s “Gypsy Wagon.”