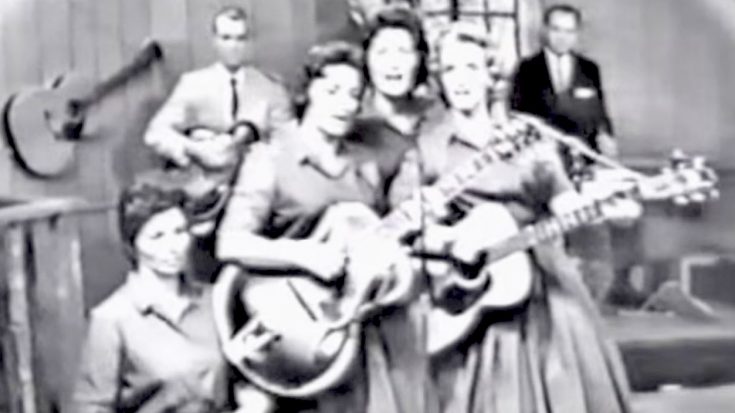 Country Music Owes A Lot To The Carters

No one can ignore the profound impact that the Carter Family had on country music. Originally a trio, the group’s membership included husband/wife A.P. and Sara Carter, and A.P’s sister-in-law, Maybelle Carter.

Maybelle typically served as the group’s lead vocalist and also played guitar and autoharp. She passed her talents and passion for music on to her daughters, who later joined her in the business.

Country Music Hall of Fame member Mother Maybelle Carter, of The Carter Family, was born on this date in 1909. Learn more about the Carter Family here: https://t.co/mFWfsLbskt pic.twitter.com/lLLDpHLdQa

The original Carter Family group disbanded in 1944, but Maybelle continued to perform with her daughters: Anita, Helen, and June. This quartet branded themselves as the Carter Sisters, though many considered them to simply be a second generation of the Carter Family.

All of the daughters sang vocals, and they each made instrumental contributions to the group as well. Anita played guitar and accordion, Helen played guitar and bass fiddle, and June played guitar, autoharp, piano, and banjo. June would go on to become the most famous Carter sister, due in large part to her collaborations with her husband, Johnny Cash.

You can see all of the Carter ladies’ talents on full display through the vintage footage we’ve included for you below.

This footage shows young Anita, Helen, and June performing on the set of the Grand Ole Opry with Maybelle.

Just as Maybelle did in the Carter Family’s early days, she took on the role of lead vocalist. Her daughters backed her up with their sweet harmonies and instrumental skills.

The song that the quartet picked to sing that day was as traditional as it gets. Titled “Wildwood Flower,” the tune was first published in 1860, and was classified as a folk song.

The Carters are responsible for making “Wildwood Flower” famous, and their version of the tune remains the most recognizable.

Watching Maybelle and her daughters sing “Wildwood Flower” in the video below is like taking a trip back in time. From the second you hear the first note, you’ll feel yourself transported into a completely different era of country music history.

Take a stroll down memory lane by tuning in to the Carters’ performance of “Wildwood Flower.” This is something that no classic country fan can miss!