Josh Turner Performs ‘How Great Thou Art’ From His Gospel Album 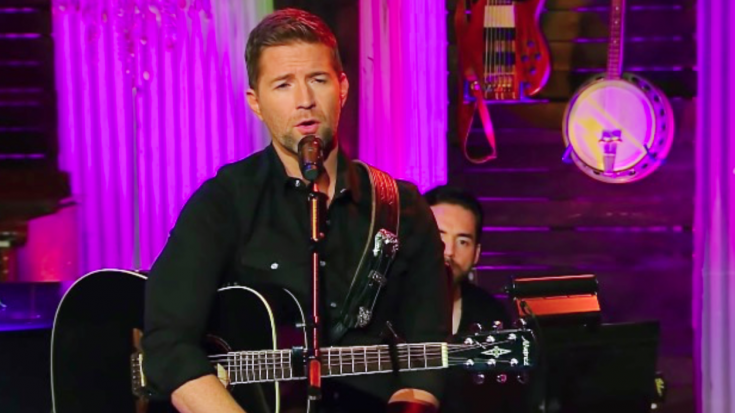 From the get-go, Josh Turner made it clear that his faith would always influence his music.

Written solely by Josh, his second single, “Long Black Train” isn’t about a jet-colored locomotive. Rather, it is all about resisting temptation and sin.

In the years since then, Josh has recorded a number of other songs that have been influenced by his faith. But the one thing fans waited to hear for years was a full-length gospel album.

Finally, in September 2018, it was revealed that Josh recorded his first gospel record. Titled I Serve a Savior, the collection of 12 songs was released in October 2018.

The tracks on I Serve a Savior include updated versions of some of Josh’s previous songs (such as “Long Black Train) and original tunes.

One original that fans will find on the album is titled “The River (of Happiness),” which was written by Josh’s wife, Jennifer, and their son, Hampton. The song features backing vocals from all four of Josh’s sons.

I Serve a Savior also features Josh’s renditions of classic hymns, including the longtime favorite, “How Great Thou Art.”

Today I released one more song, “How Great Thou Art,” from my new album I Serve A Savior. The full album releases worldwide next Friday! Listen to the song or pre-order the album here: http://strm.to/IServeASavior

“I knew when we were putting this project together, that I had to include this song.” Josh said in an introductory clip about “How Great Thou Art. “This is a song that I grew up singing in church and the arrangement of the song on this record is one that I’ve been doing probably since I was in college and I invited Sonya Isaacs to come in and sing on the song with me, and I hope you enjoy it.”

For those of you who don’t know, Josh’s collaborator on the song, Sonya Isaacs, is a country and Christian singer from Morrow, Ohio. She has seen five singles chart on the Billboard Hot Country Songs chart, including her signature song, “No Regrets Yet.”

In addition to her country music career, Sonya also sings with the popular gospel group The Issacs, and is known for co-writing Martina McBride‘s Grammy-nominated song “I’m Gonna Love You Through It.”

Knowing all of that, we bet y’all can’t wait to hear what Josh and Sonya sound like singing “How Great Thou Art” together. Well you’re in luck, because we have a recording of their performance right here.

It’s So Gorgeous To See Live

Josh shared the official audio for the song prior to the album’s release, and it’s just as gorgeous as you’d expect.

But that’s not all…Josh also debuted a live video of himself performing “How Great Thou Art” (without Sonya) at the famous Gaither Studios.

Watching him sing the song live gives you an even greater appreciation of his talent. You can tell that nothing is manufactured about his sound or his sincerity, which makes his performance all the more powerful to witness.

Enjoy Josh’s live “How Great Thou Art” performance below. Nothing warms the heart quite like hearing an old hymn performed as beautifully as this.