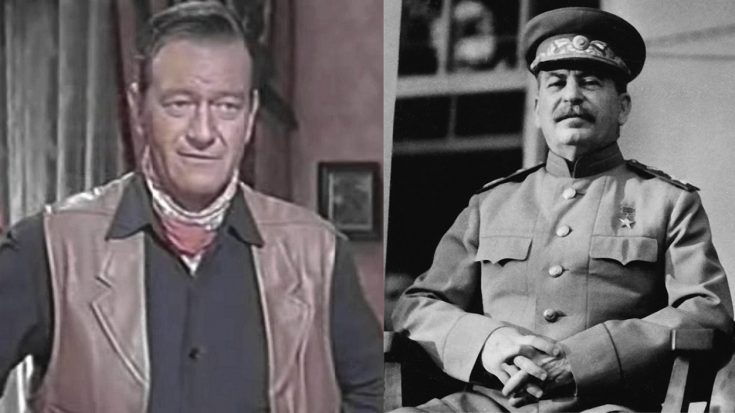 According to legendary actor Orson Welles, John Wayne was actually on the hit list to be killed by Joseph Stalin.

Interviews with Wayne’s close associates and the movie legend Orson Welles disclosed that Stalin ordered the KGB to assassinate John Wayne because he considered his anti-communist rhetoric to be a threat to the Soviet Union.

Russian filmmaker Sergei Gerasimov, who attended a peace conference in New York in 1949 was very close to Stalin and told him of John Wayne’s anti-communist beliefs, according to Michael Munn, a film historian and author of John Wayne – The Man Behind The Myth.

“Stalin decided that he would have him killed,” Mr. Munn said, according to The Guardian.

Mr. Munn says he was told of the plot by Orson Welles at a dinner in 1983 that the KGB was given the task of assassinating Wayne.

“Mr Welles was a great storyteller,” Mr. Munn said, “but he had no particular admiration for John Wayne.” He said that Welles stuck true to that his sources were excellent.

Mr. Munn said that Wayne personally told him that his friend, the stuntman Yakima Canutt has saved “saved his life once” in the early 50s.

“Yakima told me that the FBI had discovered there were agents sent to Hollywood to kill John Wayne,” said Mr Munn. “He said the FBI had come to tell John about the plot. John told the FBI to let the men show up and he would deal with them.”

The Story Only Gets Deeper & More Interesting

Learn More In The Video Below