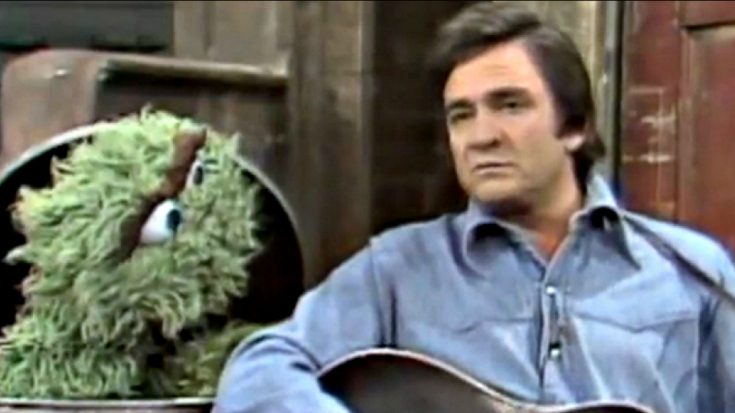 Few children’s television shows have made as great an impact as Sesame Street. For more than 50 years the educational program has made learning fun through the use of puppets, unique sketches and comedy. The show has also featured numerous celebrity guests, including the Man in Black himself….Johnny Cash.

Cash visited the set of Sesame Street during its fifth season where he surprised the street’s resident grouch with a performance of “Nasty Dan.” It’s one of the few moments on the show where Oscar the Grouch shows his softer side.

In the clip, Cash thumps Oscar’s trash can with his black guitar. When Oscar appears, Cash tells him, “You’ll like this,” as he begins to sing the song from his 1975 children’s album appropriately titled, The Johnny Cash Children’s Album.

As the Man in Black sings the tale of Nasty Dan, Oscar can’t seem to contain his excitement. “He frowned a bunch, ate nails for lunch and he never laughed. He’d growl and yell and I heard tale he never took a bath,” Johnny sang, much to Oscar’s delight.

When the song is over Oscar gives Cash a rare compliment saying, “that was really great” and calls the singer “Johnny Trash.”  Cash corrects him, bangs the side of his trash can with his guitar and tells him to have a rotten day. Oscar joyfully replies, “there goes my kind of guy.”

See Johnny Cash sing “Nasty Dan” for Oscar the Grouch in the video below.