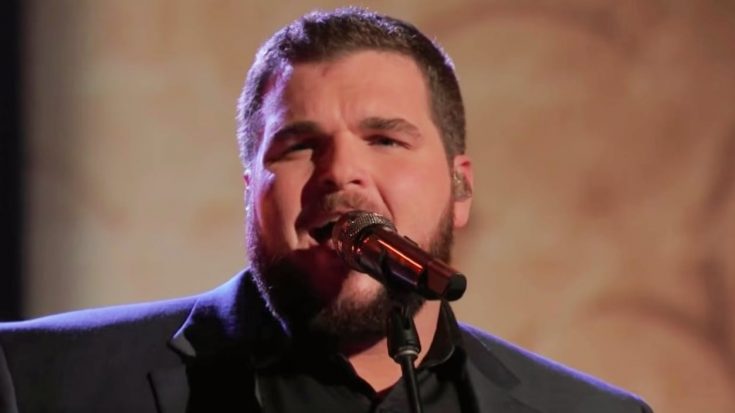 Even though he was only a one-chair turn during blind auditions, Jake Hoot quickly proved to be one of the standout stars of Season 17 of The Voice. He won both his battle and knockout, securing his place as a member of Kelly Clarkson‘s team.

Hoot then advanced to the live shows. Week after week, viewers voted him through as one of the top contestants. That meant he never had to compete in any of the Instant Save rounds.

The 31-year-old single father went on to become one of the Top 8 competitors of his season, and eventually won the show!

After making the Top 8, Hoot began preparing for one of the most difficult weeks of the competition…the semifinals. At the end of semifinals week, the Top 8 would be reduced to the Top 4, with those last four contestants advancing to the season finale.

Song choice was crucial for Hoot, since it could make or break how fans would respond to his performance. So he chose one of the most well-known songs in music history…an Eagles song called “Desperado.”

Named as one of Rolling Stone‘s 500 Greatest Songs Of All Time, “Desperado” was released in 1973. It was never released as a single, but still went on to become one of the Eagles’ signature songs.

The track was later covered by notable artists such as Kenny Rogers and Linda Ronstadt.

It’s a song that Hoot’s mother has always enjoyed. Because of this, Hoot told Clarkson he was singing “Desperado” in his mother’s honor during the Voice semifinals.

We’re sure Hoot’s mother was proud of his performance. Many viewers deemed it one of the best performances of the night, with Twitter user Tyler Childs writing, “If that [performance] doesn’t get him through something is wrong with the voters.”

See more fan reactions to Hoot’s cover of “Desperado” below.

@kellyclarkson #VoiceTop8 man with what Jake Hoot just did on Desperado I swear even Glenn Fry is rising out of his grave to give a standing ovation. If that doesn't get him through something is wrong with the voters.

In case you missed Hoot’s rendition of “Desperado,” or simply want to hear it again, tune in to the video below. There’s no doubt he left it all on the stage in that moment.

Hoot sure has come a long way since his one-chair turn blind audition!