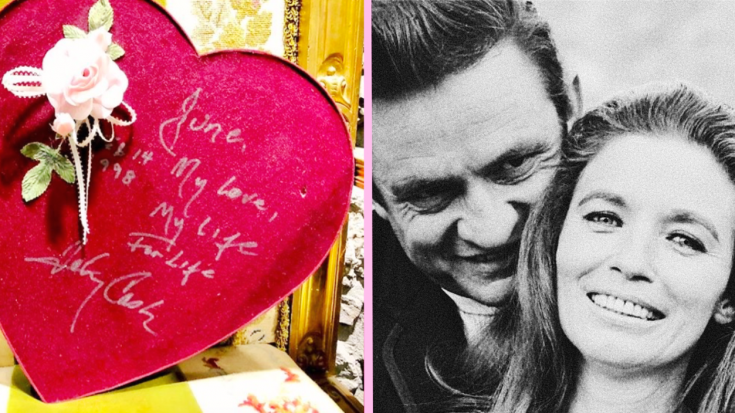 The movie Walk the Line not only focuses on Johnny Cash‘s career, but his relationship with wife June Carter. It shows them meeting, falling in love, and going through struggles as they try to keep that love alive.

Of course, that was a dramatized version of the couple’s true love story. As entertaining as it was to watch, Johnny and June’s real-life romance was equally intriguing, if not more so.

The couple met when Johnny made his debut at the Grand Ole Opry in 1956. Both were fans of each other’s music, as Johnny was one of the up-and-coming stars at the time and June was part of the legendary Carter Family.

Once they met backstage, legend says Johnny told June, “I’ve always wanted to meet you,” and she responded with, “I feel like I know you already.”

How Their Loved Finally Bloomed

They were both married at the time, so their romance wouldn’t blossom until years later, after each had been through a divorce. By 1968, Johnny was ready to make June his wife, and asked her to marry him in front of thousands of fans after they sang their now-iconic duet, “Jackson.”

June was stunned at first, and tried to get Johnny to move on with the show. But he wouldn’t until she answered him, so she finally said “yes!”

The couple married on March 1, 1968, and had their first and only child together, John Carter Cash, almost exactly two years later, on March 3, 1970.

They remained together for the next 35 years, only parting after June passed away in May 2003. Johnny was left without his beloved for the first time in decades, but not for long. He passed just months later, in September 2003.

Today in 1968 : Johnny Cash married June Carter. They remained married for 35 years until June passed away in May 2003. #JohnnyCash pic.twitter.com/7yksIU3Bbw

Up to the end, Johnny and June loved one another deeply. The strength of their relationship never weakened, something that Johnny proved in a Valentine he wrote to June after 30 years of marriage.

Using just seven sweet, simple words, Johnny beautifully expressed his love for June in a way that only he could. The Valentine reads, “June, my love, my life for life.” He then signed his full name at the bottom, and dated the note.

He wrote the note on a bright red heart with a metallic marker or pen, and a tiny rose embellishment covers one side of the heart. As simplistic as the Valentine may look, it contained a whole wealth of love.

The Johnny Cash Museum shared a photo of the old Valentine on its Instagram account, allowing everyone to read Johnny’s sweet words no matter where they are in the world.

Johnny's Valentine to June, circa 1998. Share with your Valentine, and see this heartwarming love note on display at the Johnny Cash Museum!

How romantic is that? Fellas take note, sometimes the simplest of things can win a lady over!

Johnny and June’s love was like no other, and as artists, no others will ever be able to compare to them. We miss them both dearly.