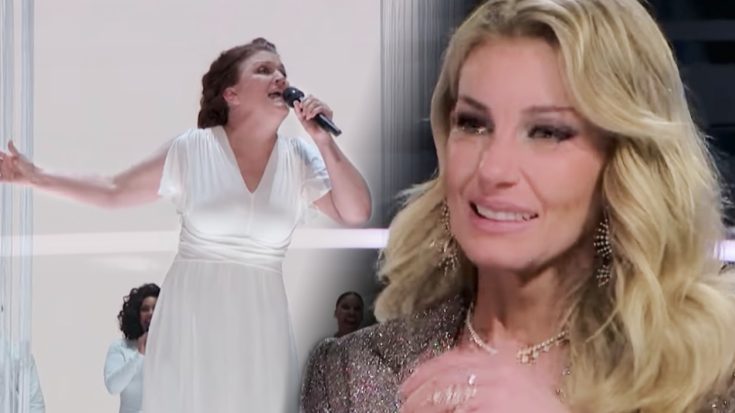 Week after week, CBS’ new competition show The World’s Best has been giving some of the world’s best performers a platform to perform their act on the biggest stage – national television.

The best talent from all around the ? compete to become the #WorldsBest. The stage lights up starting after the #SuperBowl. ? @j_corden @drewbarrymore @rupaulofficial @faithhill

Performers from all over the world have displayed their talents whether it be singing, dancing, ventriloquism, magic, or really, anything you can think of!  The point is, you never really know what to expect when a person walks out on the stage.

On Wednesday night’s (Feb 13) episode, a woman named Vonnie Lopez stepped on the stage and proved that God works in incredible ways.  In an interview published prior to the episode, Lopez sat down with CBS’ Matt Weiss to talk to her about her gift that was truly given to her by God.

Born to an incredibly musical family, all Lopez wanted to do was sing, but there was one huge problem – she was born tone-deaf. Her father was a pastor and recording artist, mother was a songwriter and pianist, her brother produces music, plays bass and sings. Her family all performed together and all she ever wanted to do was sing with them.

She explained to Weiss that during their rehearsals, she’d be in the back trying to sing along, but everything came out monotone.

“I just started praying, every single day I would pray to God to be able to sing with my family,” she said.

When she was 14, she got the chance to perform a solo in front of their church when her youth pastor asked her to sing at a youth service. Her parents were very weary of the invitation because she was tone-deaf, but Lopez was determined to perform. One day, she was practicing the song with her mom and something incredible happened.

“He saw me standing there next to my mom at the piano singing and that I was singing on key,” she revealed to Weiss. “He walked in and fell on his knees and started giving God the glory for what he recognized to be miraculous healing, even though I didn’t realize it until a few years later that that’s exactly what had happened. My prayers had been answered and that was it for me. That was where it all started and I haven’t stopped singing since. I don’t care if there’s 30 people or 100,000 people – I love it. I know that it’s a gift, I didn’t get it naturally and so it means that much more to me.”

Since then, Lopez has been perfecting her craft, exceeding her own expectations, and with a recent performance on The World’s Best, winning over the world.

The final round of auditions includes the United States’ Vonnie Lopez & The High Praise Choir aka “The Heavenly Voice” ? Don’t miss them tomorrow on #WorldsBest

With The High Praise Choir backing her, she performed Andrae Crouch’s “My Tribute (To God Be The Glory).” Her beautiful vocals wowed the three American judges, as well as the judges in the Wall of the World.

It didn’t take long for Faith Hill to burst into tears from Lopez’s powerful performance. Watch it below.