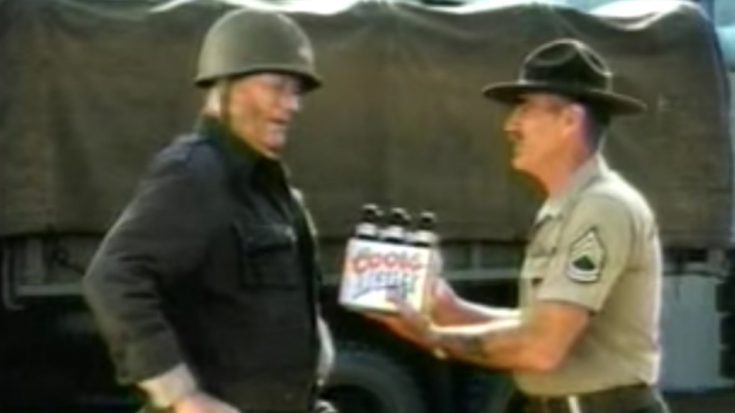 Remember that time R. Lee Ermey and John Wayne shared the same screen together for that Coors Light commercial in the 90s? Whether you do or you don’t, it was awesome and we’re going to show it to you again.

The commercial was featured in 1992 and showed R. Lee Ermey as a drill sergeant who had just assembled his soldiers in front of him to get down to the bottom of what he thought was mischief happening on the military base.

Drill Sergeant Ermey screams out to the soldiers, “During a surprise inspection of your barracks this afternoon, I found this!” as he holds up a six-pack of Coors Light.

All of the soldiers stayed silent as Ermey walked around trying to figure out whose it was. He began to remind them how delicious the beer is and one soldier began to drift off in thought before getting snapped back into reality from Ermey screaming in his face.

Ermey yells at the entire platoon, “I want to know who’s beer this is right now!”

“It’s my beer, Sergeant,”John Wayne says as he comes walking onto the sceen playing a character similar to his 1987 Full Metal Jacket role, Gny. Sgt. Hartman.

The rest of the interaction between the two icons was hilarious and we’re not going to ruin it for the ones who haven’t seen it yet – But before you go, remember this: Wayne wasn’t really there. He died in 1979.

The people who created the ad used repurposed footage of Wayne to make it look like he was in the commercial. The ability to edit footage like that was fairly new at the time and people loved it. Take a look at the commercial below.