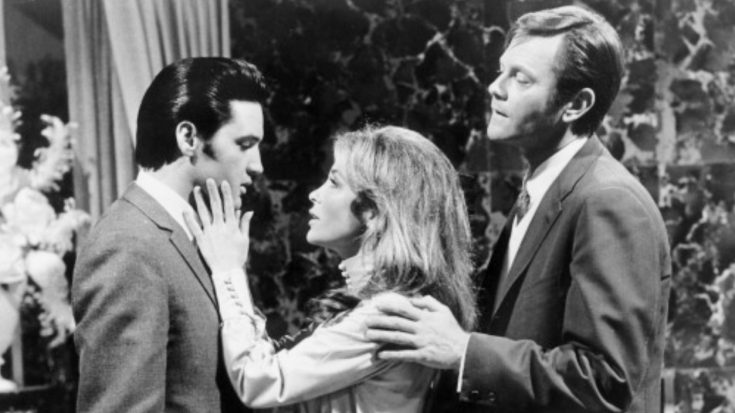 Brunette Bombshell Gets Best Of ‘The Duke’

Actress Michele Carey was one of the leading names in Hollywood for multiple decades, and as a result, got the chance to star alongside some pretty famous names. During the 1960s, she was able to co-star with two of the world’s brightest stars…John Wayne and Elvis Presley.

Her most well-known role was in the film El Dorado (1967), in which she played a feisty woman named Josephine “Joey” MacDonald. Wayne was the lead star in that film, and played the role of a gunslinger named Cole Thorton.

At one point in the film, Carey’s character actually shoots Wayne’s. Talk about girl power!

Next to El Dorado, Carey’s most recognizable role was in the Presley-led flick, Live a Little, Love a Little (1968). Carey played a character named Bernice, Presley’s main love interest in the film.

Bernice is an eccentric artist that meets Presley’s character Greg Nolan on the beach one day. It is eventually revealed that she goes by multiple names depending on who she is speaking to. She tells Greg that her name is Alice, but is known as Susie and Betty to others.

As you can expect just from that description alone, some pretty hilarious things occur as the two characters further their relationship.

For Kazzy…Elvis and Michele had a genuine friendship for many years.

In addition to starring in those two films, Carey also appeared in The Sweet Ride (1968) with Gilligan’s Island star Bob Denver, a well as the film Dirty Dingus Magee (1970) alongside Frank Sinatra.

After being out of the spotlight for so long, it may have been a while since you thought about the famous brunette bombshell. From the sounds of it, she enjoyed a private life in California with her husband, Fred G. Strebel, who she married in 1999. He eventually passed away in 2011.

Now, we’re sad to report that Carey has passed away as well. According to a spokesperson who released a statement on the actress’ official Facebook page on Saturday (December 1), Carey left this world on November 21 “with her family by her side at the tender age of 75.”

The spokesperson also wrote that her passing was “sudden and unexpected” but went on to add, “we rejoice knowing that she lived her life to the fullest.”

Today I have the saddest task, one I had never hoped to do during my lifetime, and that is to report to the many friends…

Our hearts go out to Carey’s family and all who loved her. This is surely a sad and difficult time for them, so please keep them in your prayers.

One thing’s for certain, Carey will never be forgotten. Her legacy lives on through her many films, so her star will always shine.