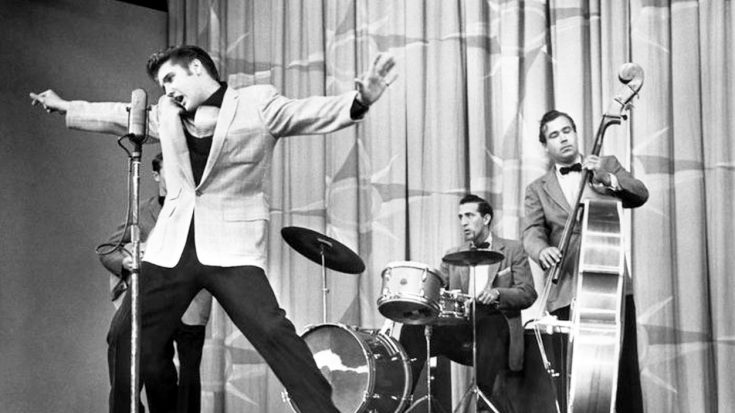 The would-be King Of Rock And Roll took America by storm with his hip-shaking and gyrating moves that were unseen in that era.

Many consider his appearance on the Ed Sullivan Show to be Elvis Presley’s first television performance, but with just a little research you’ll find that he actually made his debut on Stage Show, a short-lived CBS program hosted by the Dorsey Brothers.

For six weeks from January 28th to March 24th, 1956, Elvis made regular Saturday appearances with Jimmy and Tommy Dorsey’s national TV program. A mid-2000s biography of Tommy Dorsey by Peter J. Levinson reveals that the show had been looking around for some new acts to host when they ran across Elvis. After hearing him, they booked him for the following week’s show.

Presley met Tommy Dorsey in New York for rehearsals prior to his January 28th performance, but the other musicians didn’t seem to care much for Elvis’ daring moves and appearance.

“During our rehearsal with him, some guys fell off the bandstand laughing at Elvis,” recalled musician Pat Chartrand. “It was so shocking to all of us, we couldn’t believe it.” Musician John Frosk added, “We didn’t like him because he looked dirty, and he needed a haircut. We thought he never bathed.”

After the rehearsal, Dorsey made a bold statement that would later prove true, “You see that guy Elvis Presley – he’s going to be one of the biggest names in show business in a short time.”

Famed New York disc jockey Bill Randall welcomed Elvis to the stage that night with words that would mark a significant change in music for the world. “We think tonight that he’s going to make television history for you!” The singer went on to perform two versions of R&B staples, “Shake, Rattle, and Roll,” and “I Got A Woman.”

The singer’s national debut on Stage Show was “like nothing that anyone had ever seen before on national television,” Levinson stated. “The sloe-eyed Presley had a leering smile while his body gyrated with unabashed sexuality. A strong country blues sense emanated from the handsome young singer…whose forelock drooped over his face, added to his allure…”

From his jaw-dropping performance on this show, many other networks and hosts were incredibly hesitant to bring him on. Even Ed Sullivan vowed to never book the singer on his show because of his aggressive and overtly sexual dance style.

On his first appearance, Elvis was visibly nervous. He sang 'Shake, Rattle, and Roll' and 'Heartbreak Hotel', doing a little shaking and shimmying, and then quickly moved offstage. pic.twitter.com/0QafUJSFtW

Sullivan changed his mind when his colleague crushed his ratings by having Elvis on his own show – but dressed in a tuxedo with a sad-looking basset hound in an effort to control his movements.

Not long after, Sullivan allowed the headline-smashing singer on his own show and booked him for the then-unheard-of sum of $50,000. Unfortunately, Sullivan was not able to attend it personally due to a car accident. There have been many rumors that even though they allowed him to perform, the directors made sure the cameras only shot him from the waist up in order to remove his shocking hip gyrations.

The show’s directors may have prevented the viewers from seeing his moves, but you can clearly hear the women squeal, scream, and shout as he sings and moves about the stage. Now, 60 years after he ignited a fire no one could put out, America is still listening to his unforgettable music and swinging our own hips!

Listen to Elvis sing one of the songs that brought him immense success “Shake, Rattle & Roll” in the video below!