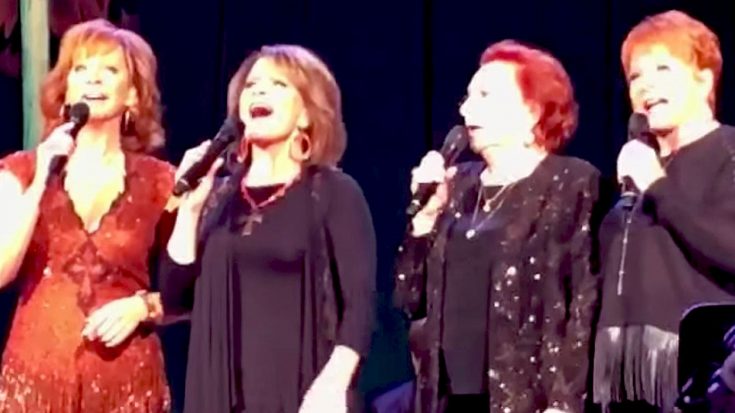 Multiple publications have referred to the song “I’ll Fly Away” as the most-recorded gospel song of all time. We’d have to agree with that claim, because it seems that almost every gospel and country artist has recorded the song before.

When you factor in the number of live performances as well, there’s no denying that “I’ll Fly Away” reigns supreme in the gospel scene. It makes sense why artists would want to record and perform the song so much…it has been a favorite of gospel fans for nearly a century.

If you happen to be a fan of gospel and country music, you’re going to love the performance we have to share with you today. This performance comes courtesy of Reba McEntire, her mama Jacqueline, and her sisters, Alice and Susie.

For those of you who didn’t know, Reba isn’t the only musical one in the McEntire bunch. In fact, her entire family has ventured into musical waters before. Her sister Susie is actually a gospel singer, so “I’ll Fly Away” is a song that she’s more than familiar with.

When Reba recorded her first-ever gospel album, Sing It Now: Songs of Faith and Hope, she knew she had to have Susie, Alice, and their mama join her on a track. The song she picked to feature them on was none other than “I’ll Fly Away.”

Speaking to Nash Country Daily, Reba described what it was like recording the song with her family:

“[It was] too much fun. We were just silly as we could be. We all got around the microphone and Susie and I—we were up there just singing our little hearts out and Mama and Alice just kept backing up. They’re not used to it, saying, ‘Oh, we don’t want to be on tape, we can’t sing.’ I’d say, ‘Oh, get up here.’ It was so fun.”

Much to the delight of the crowd that gathered to watch Reba sing at the Ryman Auditorium in 2017, her mom and sisters joined her on stage to sing “I’ll Fly Away.”

In this clip, you can perfectly hear the McEntires’ harmonies as they sing the gospel favorite. One fan of Susie’s noted on Facebook that Reba was clearly singing alto, while Susie took on the soprano part.

She asked which parts Alice and Jacqueline were singing, and Susie responded! While she didn’t say what Alice was singing, she noted that their mama was singing bass.

You well know by now that this version of “I’ll Fly Away” is as gorgeous as can be. Prepare to be mesmerized when you watch it in the video below.