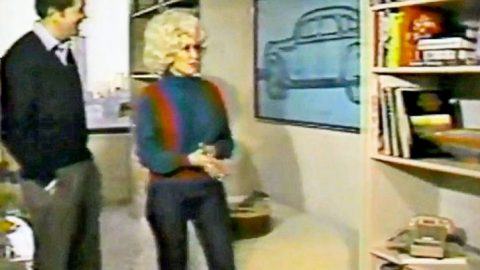 The country music queen walks you through her massive pad overlooking Central Park in this rarely-seen video from when she was getting ready for her debut in the instant movie classic, 9 to 5.

Taking to New York City, this country bumpkin turned wildly successful musical superstar and award-winning songwriter was just about to become one of the hottest actresses in Hollywood and a new penthouse pad was just what the doctor ordered.

At the very first glance, the photos show a toned-down, minimalist loft that many wouldn’t expect to belong to Dolly Parton if they didn’t already know it was hers. Originally decorated by her staff, and notably – her former manager-turned-business partner, Sandy Gallin – the expansive flat was filled with books, rare art, and furniture that only the 80s could love.

The suite had sweeping views of NYC’s Central Park and was one of the places that Parton would stay in between musical and movie projects over the years. She shared the massive place with her manager, Gallin, and truly fell in love with the place.

Throwback Thursday to my FIRST movie!! Here I am as Doralee Rhodes in 9 to 5 way back in 1980 🙂 #TBT pic.twitter.com/IyQO3tVLwG

“I love it up here. I don’t get here all that often, but it’s a good place for me to work, I write a lot of songs up here,” Parton told CBS during an episode of their Country People series in 1980. “‘Looking out over Central Park there’s just that little bit of simplicity, it almost looks like a country scene, and then to kind of look out and see all the buildings and the high rises. It’s like the country and the city, just this little area here, and I get inspired.”

Throughout the interview, Parton ventured into different rooms discussing her life at the penthouse and revealed that the decor and styling were not actually her doing.

“When they had his [Sandy Gallin’s] picture up there at the Emmy’s, it was like a knife in my heart…” — @DollyParton on Radio Andy pic.twitter.com/r2PSSxsq6A

“It ain’t my taste,” She revealed. “That’s when Sandy here comes in handy. He’s got taste and I got talent!”

“I have to be honest and tell you some of the pictures in this apartment cost a lot and I can’t help think: ‘Good Lord, I coulda’ done that in first grade!'”

#RIP to Sandy Gallin, responsible for bringing Dolly Parton and Country Music itself into world wide exposure. I owe my career to this man.. pic.twitter.com/m92Qx9ZdG4

Gallin, who managed Parton’s career for many years and partnered with her on a very successful production company was one of her dearest friends. In a 2009 interview, she explained that the pair were like Will and Grace, adding that “he had one end of the house and [she] had the other”.

Watch the video and look at the photo gallery from Parton’s episode of CBS’ Country People below!