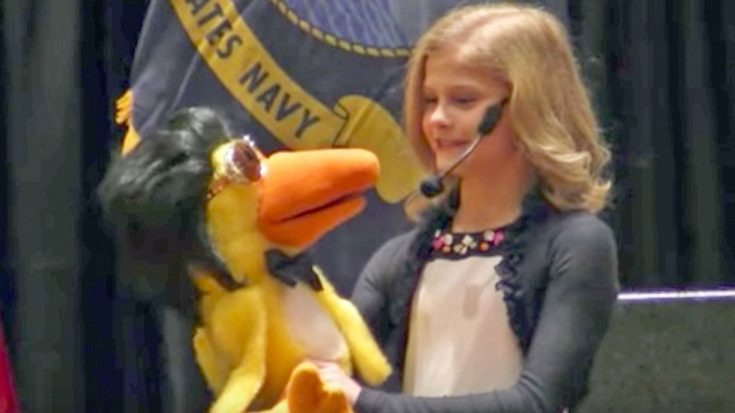 Prior to making her massive debut on America’s Got Talent with her “Golden Buzzer” earning audition, singing ventriloquist Darci Lynne Farmer was stealing hearts across the nation with the help of her talented puppets.

Darci Lynne Farmer Returns To ‘AGT’ To Give Mind-Blowing Performance
Just when we thought Darci could get any better…she goes and does this. It's really no wonder why she won the show last year. She's unbelievable! https://t.co/GxrGAwllop pic.twitter.com/Aujcu63n58

Back in early 2016, the recently turned 13-year-old teamed up with her Elvis Presley-impersonating puppet, Okie the duck, for an Elvis-style duet, the adorable blonde and her fuzzy friend kicking off their performance with some quick-witted banter.

“Oh Darci? Won’t you be my teddy bear?” asked Okie the duck.

“Oh good grief! Do you wanna go back in your case?” replied an outraged Darci Lynne.

After rolling her eyes at Okie’s corny joke, Darci Lynne and the rockabilly duck teamed up for a performance of The King’s ’60s hit, “(You’re the) Devil in Disguise.” Pouring her signature charm into the performance, the Oklahoma-native perfectly executed her delivery of the Presley’s hit.

From learning the art of ventriloquism when she was only 10 years old to winning America’s Got Talent just two years later – is there anything this talented 13-year-old can’t do?

“(You’re the) Devil in Disguise” was released by Presley in 1963 – topping the charts on an international scale – hitting No.1 in a staggering eight countries.

You can watch her rendition of Presley’s hit below!