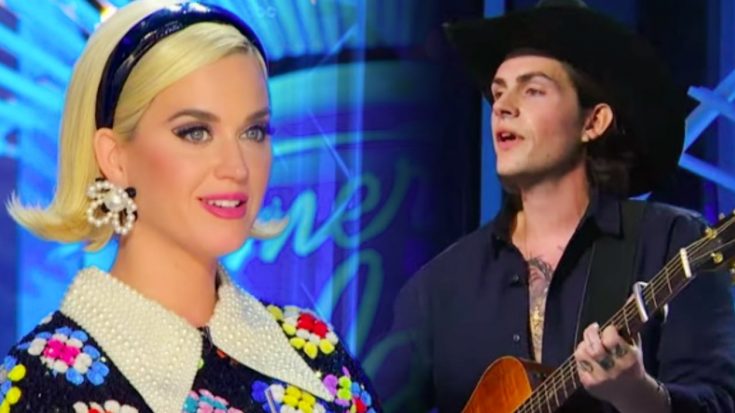 When Dillon James walked into the room to audition for the 2020 season of American Idol, the judges knew there was something special about him. Katy Perry instantly noticed his chest tattoo, and asked if he’d be willing to show off more of it.

James was happy to do so, revealing the piece of art that covers his whole chest and stomach.

As he talked with the judges, James shared his past trials and tribulations. He said he is now sober and living a new life with his loving, supportive family behind him.

Then-26-year-old James is from Bakersfield, the city known as the home of “The Bakersfield Sound,” a subgenre of country music. Artists known for defining and championing the style include Merle Haggard, Dwight Yoakam, and Buck Owens.

But instead of performing a song by one of the Bakersfield legends, James opted to sing a tune by Bob Dylan. The song he chose was “Make You Feel My Love,” which Dylan wrote. But the song was first released by Billy Joel in 1997 before Dylan released his own version the same year.

The song earned its tie to country music when Garth Brooks recorded a cover for the soundtrack of the 1998 film, Hope Floats. His rendition was a success, and claimed the top spot on the Hot Country Songs chart.

Instead of channeling Brooks, Dylan, or Joel in his Idol audition, James took “Make You Feel My Love” and made it his own. After he finished singing, judge Lionel Richie praised his ability to make the song sound like it belonged to him, saying that was “everything.”

Perry also had high praise for James, and likened him to one of the leading stars in the music industry right now…rapper Post Malone. She recognized the fact that James was undisputedly country, but that he had a bit of an edge and some mystery. That’s why she went on to call him a “country Post Malone.”

When it came time for the judges to vote on James’ fate, the verdict was unanimous…they all wanted to send him to Hollywood! Richie voted last, and he said it was a “no-brainer” to give James the coveted golden ticket.

Check out the below video to see James’ audition so you can understand why the judges were so enchanted by him. He has a lot of talent, that’s for sure!