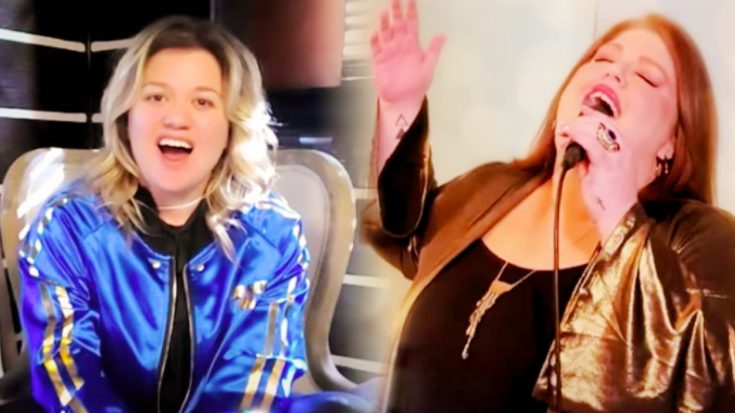 Mandi Thomas was just 11 years old when she began training as a classical vocalist. Those years of training helped strengthen her voice, and gave her the ability to hit sky-high notes.

Thomas later went on to study music in college and taught vocal lessons after she graduated. The 33-year-old Memphis native decided to showcase her vocal talents on The Voice after watching two of her past students achieve success on the show.

She showcased her classical training and skills as an opera singer through her blind audition, as she sang Andrea Bocelli and Sarah Brightman’s “Time to Say Goodbye.”

Kelly Clarkson was the only coach who turned her chair, and happily welcomed Thomas to her team. She made it through the battles and the knockouts, proving through the process that she excelled at singing other styles as well, not just opera.

For example, in the battles, Clarkson had Thomas compete against her teammate Sara Collins while singing Martina McBride‘s “My Baby Loves Me.” You would think Thomas’ classical training wouldn’t translate to an upbeat, carefree country tune, but it did.

Clarkson picked Thomas as the winner of the battle.

In her knockout, Thomas conquered yet another country tune when she sang Maren Morris‘ “My Church.”

After winning both her battle and knockout, Thomas advanced to the Top 17. That’s when she revisited country music once more, opting to sing Lee Ann Womack‘s inspirational hit “I Hope You Dance.”

Thomas had an extra challenge to face with her performance as a member of the Top 17. Due to current circumstances, Voice contestants have been forced to film their performances from home and can’t work with their coaches in person.

But Thomas rose to the challenge, and delivered an at-home performance of “I Hope You Dance” that impressed Clarkson and all of the other coaches.

When Clarkson got the chance to comment on her team member’s performance, her high notes were the #1 thing she focused on. “I love this song for you, I love that you got to soar on those big notes,” she said.

Clarkson later went on to offer even higher praise to her opera singer, telling her, “You can sing anything. That’s the amazing thing about you and having you on my team.”

Tune in to the clip below to see just how well Thomas sang “I Hope You Dance.” She has proven to be a versatile artist, which is an important quality to have!