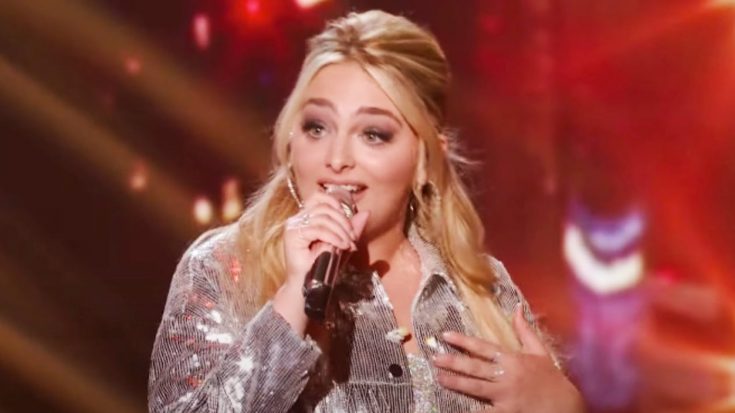 The official YouTube video of the 23-year-old artist’s audition has generated over 1.3 million views since it was posted in February.

HunterGirl has continued to advance through the competition. She’s remained true to her country roots throughout the process, singing songs such as Miranda Lambert‘s “Vice” and Sugarland‘s “Baby Girl.”

On Monday night (April 25) HunterGirl competed for a spot in Idol‘s Top 10. That night, the contestants performed songs that the judges chose for them.

All three judges selected a song for each contestant. These songs were presented to the contestants to choose from, but they had no idea which judge picked which song. They only learned the truth once they performed!

The three songs HunterGirl had to pick between were Dolly Parton‘s “Here You Come Again,” The Chicks‘ “Wide Open Spaces,” and Parton’s “9 to 5.” She chose “9 to 5.”

HunterGirl’s fellow Idol contestants seemed to enjoy her performance. They could be seen dancing along as she sang…even Bryan was grooving in his seat.

Later, HunterGirl learned that Bryan was the one who wanted her to sing “9 to 5.” No wonder why he liked her performance so much!

At the end of the night, the viewers voted to send HunterGirl into the Top 10. Check out the video below to watch her cover of “9 to 5” that helped her get there.

HunterGirl and the other members of the Top 10 will perform for “Disney Night” next. So stay tuned to see which Disney song she sings!