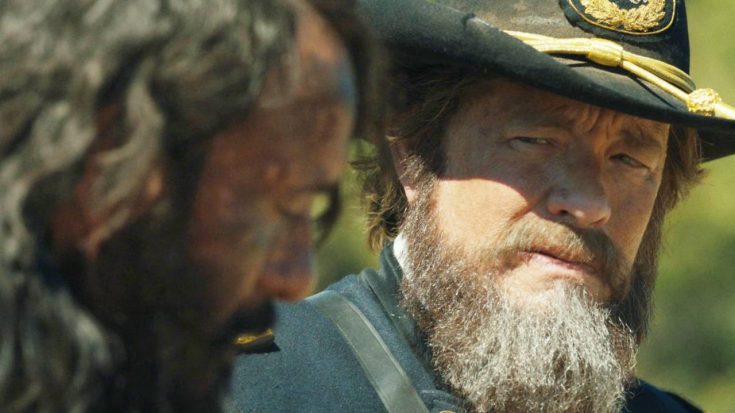 Less than 10 days before the highly-anticipated premiere of 1883, creator Taylor Sheridan revealed that a two-time Academy Award-winner will be joining the 1883 cast in the second episode. Tom Hanks appeared in the second episode as a three-star general during a battle in the Civil War. Deadline reports that his character is inspired by General George Meade.

Tom Hanks will guest star in Paramount’s #Yellowstone prequel show 1883, and here's your first look at him in the series! (Via: @DEADLINE) pic.twitter.com/i0b47OvLeU

After the Battle of Antietam, Confederate soldier James Dutton awakens after being concussed to find nothing but dead bodies lying around him. He gets up and sits down to look at the field. A Union officer, played by Hanks, puts his hand on James’s shoulder and speaks to him for a minute.

The Yellowstone prequel 1883 is so damn good. Definitely gonna fill that Deadwood hole. Also Tom Hanks is in it. pic.twitter.com/Dgtg6aJ58l

In a voiceover, Elsa tells us that her father does not talk about the war. She says that even when he’s in a group of soldiers and someone asks if he served, he says he did not.

Doing press before the premiere, McGraw sat down with CinemaBlend, who asked him if he botched scenes just to act alongside Hanks for a little longer.

“You never want to botch a scene when you got Tom Hanks in there with you,” he replied.

McGraw also revealed how Hanks’ cameo came to be, and it’s a lot simpler than you’d expect!

“He’s a great guy,” McGraw said. “We’ve been friends for a long time. Rita, his wife, and Faith are best friends, and Tom and I’ve been friends for 25 years, 24 years. I knew that there was this part in there, and I gave him a call said, ‘Hey, would you be interested in showing up doing a cameo in this show that we’re doing?’ And he goes, ‘Tell me when to be there,’ and he just showed up.”

McGraw also explained their choice of not seeing each other until they filmed the scene.

“We didn’t see each other that whole morning, because I didn’t want to see what he looked like. He didn’t want to see what I looked like, because we know each other so well. So when he walked on set, it was pretty magical. And when he puts his hand on my shoulder in that scene, you could feel the weight of the world between both of them with what had gone on. It was a pretty heavy scene.”