How Garth Brooks ‘Bullied’ Blake Shelton At Their Surprise Concert 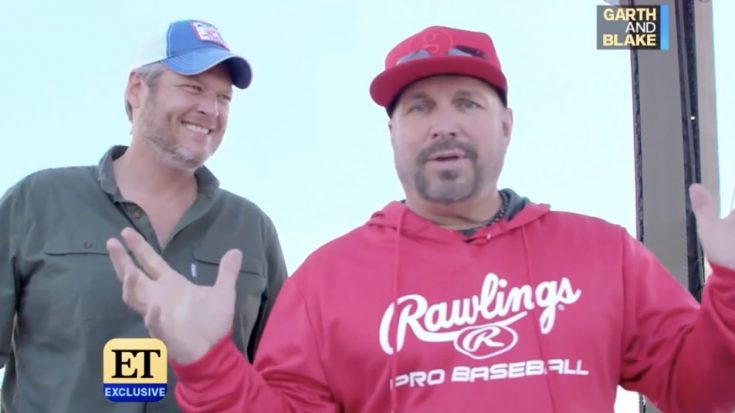 On July 19, 2019, a sold-out stadium in Boise, Idaho was treated to an awesome show put on by Garth Brooks and a special guest. He teased the guest on Entertainment Tonight weeks before, but it was still a shock to some!

The big surprise was that he and Blake Shelton performed their duet “Dive Bar” together live for the very first time!

A month prior, Brooks and Shelton sent fans into a frenzy by releasing a duet they had recorded together. Titled “Dive Bar,” the song quickly caught on with fans, even though it wasn’t made available on typical music platforms such as iTunes and Spotify (Brooks is famously against placing his music on such platforms).

When asked how the duet came to be, Brooks explained that he approached Shelton after he saw him perform “God’s Country” the ACM Awards. Like the rest of us, Brooks was impressed with Shelton’s vocals on that song, and asked if he’d like to duet with him. Of course Shelton said yes!

While they were doing soundcheck for the stadium show in Boise, the two superstars let Entertainment Tonight’s cameras capture some behind-the-scenes footage. Shelton told ET the hilarious way Brooks welcomed him to the tour.

“I got a text from my man here earlier that said, ‘Hey, man, we got your dressing room set up for you,'” Shelton recalled. “And he sent me a picture and it was a paper that said ‘Mr. Stefani’ on it.”

While Shelton called it “bullying,” the “God’s Country” singer said that he can’t even get Brooks back!

“It sucks because Garth is kind of off-limits. You can’t mess with him because he’s like the godfather of country music.”

It was all in jest and Brooks can understand how Shelton felt – he’s been called Mr. Yearwood quite a few times! In fact, he said he loves that his wife, Trisha Yearwood, is so successful on her own.

Watch the full video of Brooks and Shelton here. And watch their epic performance in Boise below.