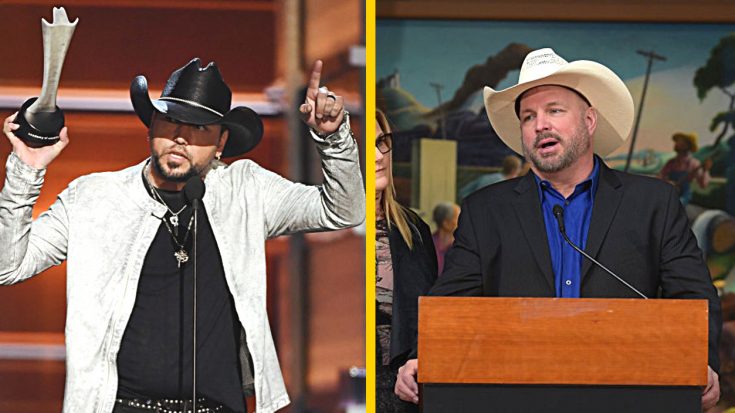 This year, Brooks was also nominated for Entertainer of the Year at the ACM Awards. Since he won in the same category at the CMA Awards in November, he was a clear frontrunner to take the ACM as well.

But there were far more reasons than his CMA wins that made Brooks a top contender. Those reasons were the thousands of fans who turned out to watch Brooks on his insanely successful World Tour, which was made up of countless sold-out and record-breaking shows.

So when the ACM Awards rolled around and Aldean was announced as the Entertainer of the Year, some viewers were quite surprised. But not Brooks…

If you were paying close attention to the ACM Awards, you likely noticed that Brooks was not at the ceremony. But he definitely kept up with who won awards, and heard the news of Aldean’s win over him in the most prestigious category of the night.

Brooks spoke about the ACM Awards during his weekly Facebook Live special Inside Studio G. He also shared his true thoughts on Aldean’s win, and he had nothing but positive things to say.

Ever so gracious, Brooks praised Aldean for his big win, saying things “turned out the way that it should.”

Then, Brooks spoke in depth about Aldean’s acceptance speech, in which he recognized the survivors of the Route 91 shooting. Aldean was on the stage at the time that the shots ran out, and has forever been connected to the shooting as a result.

This is what Brooks had to say about Aldean’s big win:

You can listen to his full thoughts on the ACM Awards by watching his Inside Studio G session in the clip below. We’re sure it means a lot to Aldean to hear those kind words from Brooks!

LIVE from Allentown! We’re all over the map tonight on #StudioG!!! love, g