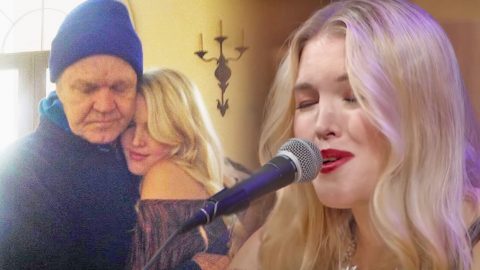 A few years before his passing on August 8, 2017, Glen Campbell’s daughter Ashley could see his Alzheimer’s Disease slowly progressing. After Campbell revealed his diagnosis to fans in 2011, he embarked on his Goodbye Tour, which Ashley accompanied him on as a member of his band.

When they returned, she moved to Nashville to pursue a solo career and had a realization that one day, her dad may not remember any of their greatest times together.

While appearing on “Country’s Family Reunion Kickin’ Back Series,” Ashley performed a heartbreaking song she wrote for her father, called “Remembering.”

“I wrote this song when…I knew that there was gonna be a time where he wouldn’t recognize me pretty soon, that he wouldn’t know who I was,” she told the audience filled with country legends and stars alike. “We’ve always had a really special connection, so I wanted to have something that would maybe be able to reach out to him even when he can’t really understand words anymore, and that’s definitely music. This is a song from me to him, kind of saying that I’ll always have his back.”

The audience watched attentively as her angelic voice sang the very poignant lyrics.

She continued to sing about their bond as musicians, guitar players, and most importantly, father and daughter.

Happy 81st Birthday dad! Love you always. Thank you for giving me the gift of music and showing me what it means to truly love and give your best to everyone you meet 💜

By the end of the performance, there wasn’t a dry eye in the room. Watch her perform “Remembering” in honor of her father below.