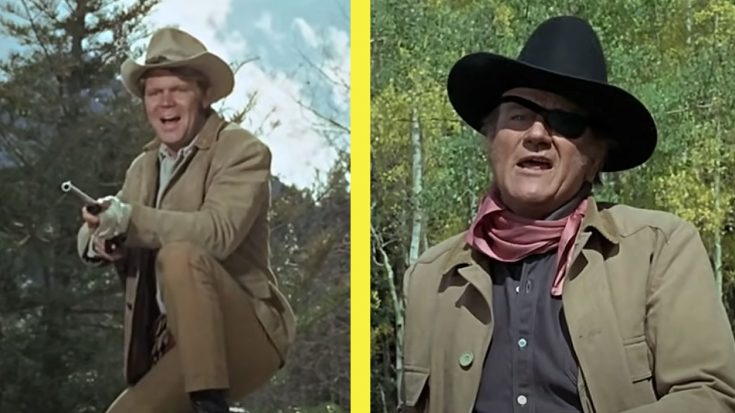 With over 70 albums released throughout his lifetime, Glen Campbell is known for his singing career. However, he also had an acting role alongside the legendary John Wayne in one of the best Westerns ever made.

Campbell starred alongside Wayne in True Grit, which was released in 1969. In it, The Duke plays the iconic character Rooster Cogburn while Campbell took on the character of La Boeuf. Perhaps the most interesting part is how Campbell stumbled into such a unique opportunity.

While at the Jules Verne Festival in November 2011 Campbell recalled the story.

“I was doing my show, I saw John Wayne in like a barn or something. He had this little girl with him.”

Campbell wondered why Wayne was there and was surprised to learn that the actor was in fact looking for him.

“He said, ‘Is there a Glen Campbell here?’ Well, my daughter wants to meet him,’” the singer recalled laughing.

Wayne praised Campbell for his art and finally asked Campbell a question that changed his life.

“Well, you must be pretty good or my daughter wouldn’t have wanted to meet you. You want to do a movie?” Wayne asked.

Campbell of course agreed, but hesitantly told The Duke that he had never acted before. Wayne’s response was simply, “I’ll drag you through it. It’s alright.”

You can watch Glen Campbell talk about John Wayne and what it was like filming True Grit below.