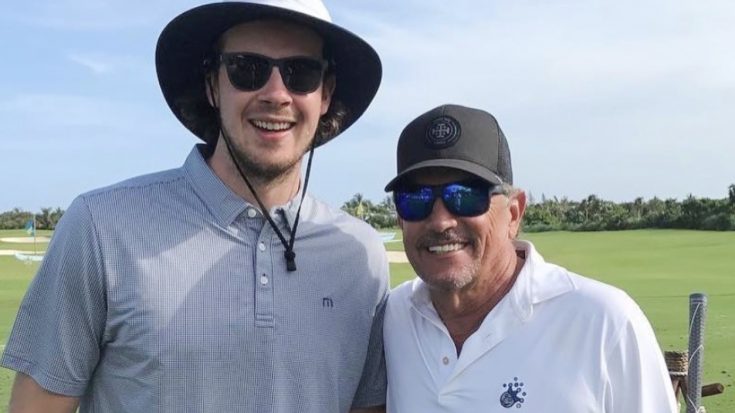 Ever since his 1981 debut with “Unwound,” George Strait has maintained a squeaky clean image, which includes being clean-shaven in a cowboy hat, boots, jeans, and a button down shirt.

Over the years, we’ve rarely seen him without his cowboy hat, which is why his fans freaked out in February when Strait shared a throwback photo of himself wearing a suit and no cowboy hat.

Since a it’s such a rare sight to see Strait without his cowboy hat and boots, we were a bit surprised to see how he dressed for his ACM Awards rehearsal with Miranda Lambert. Together, they performed his song “Run” as part of the ACM Flashbacks segment. He also sang his latest single “Every Little Honky Tonk Bar” during the awards show.

Although Strait was not wearing his iconic cowboy hat during the rehearsal, he was wearing a white baseball hat with a pair of dark sunglasses resting on top of his head. He also traded in his boots for some sneakers.

Sneak peek of tomorrow’s #ACMawards performance with @mirandalambert! Tune-in tomorrow at 8/7c on CBS to see what we’ve been rehearsing. ?: Timothy Kuratek/CBS

Well, he’s rocking a regular baseball hat again, but this time with some facial hair that had fans doing a double take.

“Wow didn’t recognize you,” one fan wrote, while others said, “Wow. Hard to believe that is George!”

Check out the photo below.

Ace in the hole! George on the links with @ryanjohansen92 from #NashvillePredators! (? Ryan Johansen)

We think he looks handsome with or without facial hair, even though we’re not used to him with it! Watch his latest music video below.