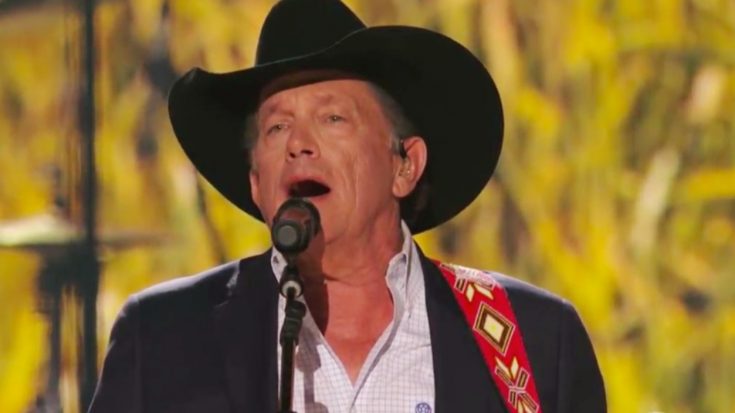 George Is On A Roll Y’all

On March 29, George Strait released a brand-new album, his first in four years. Titled Honky Tonk Time Machine, the record’s release was anticipated since Strait announced its name back in December 2018.

As the months passed, Strait also previewed the album by releasing a few tracks. Some of those tracks include an ode to police officers titled “Weight of the Badge” and a track featuring his young grandson called “God and Country Music.”

And then there’s the album’s lead single, “Every Little Honky Tonk Bar,” which helped Strait reach another “first” after many years.

The song became his first single in six years to chart within the Top 30 of the Country Airplay chart after it reached the 20th position. That’s impressive stuff!

Speaking of big “firsts” that have taken place in 2019, this also marked the first time in four years that Strait was given a performance slot at the ACM Awards. The last time the “King of Country” performed at the prestigious ceremony was back in 2015, which was when it was hosted in his home state of Texas.

On top of performing during that ceremony, Strait was also honored with a major award. He was the recipient of the 50th Anniversary Milestone Award, which the ACM gave to Strait to recognize him as an “ACM Winner Over Four Decades.”

After Strait’s absence from the past few years’ ceremonies, viewers were thrilled when it was announced he would be joining the ACM’s lineup of performers for the 2019 awards.

The deal got even sweeter when it was revealed that Strait wouldn’t just be left to sing alone. After he was initially announced as a performer, the ACM later unveiled the news that he would be collaborating with Miranda Lambert as part of its “Flashback” series.

So when it came time for Strait to finally take the stage, viewers knew they were in for one extraordinary show.

The “King” Of The ACM Awards

Together, Strait and Lambert sang his hit song “Run,” off of his 2001 record Road Less Traveled. Strait also got a solo moment, and he used that moment to sing “God and Country Music.”

As you would expect, he earned a standing ovation and everyone online was left raving about the performance.

If we had to use only one word to describe Strait’s ACM Awards performance, it would be “epic!” What a way for the “King of Country” to make his grand return to the awards show stage!

You can relive all the splendor of Strait’s 2019 ACM Awards performance by tuning in to the video below. There’s no arguing that he put on one of the best shows of the night!