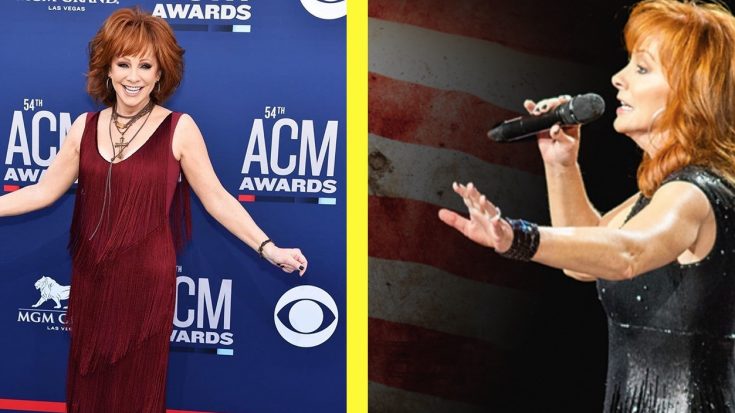 Wow! What a woman! After hosting for (so many years) Reba McEntire made a few coy jokes about her being “tired” after all these years – and it’s clear from this performance, that she’s not even close to slowing down!

The queen of #country @reba looks amazing and still has it. Love her!! #acm #acmawards #reba

Her new album, Stronger Than The Truth, which came out on Friday, April 5th, has been described by Reba herself as “the most country record” she’s put out in a long time. Her last studio album was a two-part gospel album that she’d been dreaming of doing her whole life. But now, she’s back to her country roots and this newest song is a rocking new anthem you won’t forget.

+ Our girl has hit the red carpet I LOVE HER DRESS! #Freedom and look at the way Skeeter is looking at Reba in that last video #Reba #Skeeterlasuzzo #Acmawards2019

Previously having called it an “anthem,” Reba explained in an interview with Bobby Bones that it might come across as a pure powerhouse song about patriotism, but she points out that it’s much more of a love song – and the lyrics make a subtle note of it.

Gearing up for the big night Sunday? Don't forget to listen to @Reba's single #Freedom and your other favorite country hits on the #TouchTunes #ACMawards Playlist! ?? #Reba @BigMachine pic.twitter.com/XyTKWZPpYH

The price of being free / It don’t come cheap…
That’s why people fight for it, rise for it / Burn up the night for it
Cry for it, pine for it / Cross rivers wide for it

Just a small part of this massive new album, “Freedom” is really one of her signature sure-to-be hits and folks over on YouTube already can’t get enough of it! Within just hours of it being uploaded, people had watched it thousands of times.

We loved it when she stormed the stage at the ACM Awards and took home the bacon with this epic performance of her surefire hit “Freedom” – check out the whole performance in the tweets below and let us know what y’all think!

.@reba doing her Reba thing on the #ACMAwards Sounding as good as ever! #StrongerThanTheTruth #Freedom pic.twitter.com/ev97WxYkMJ