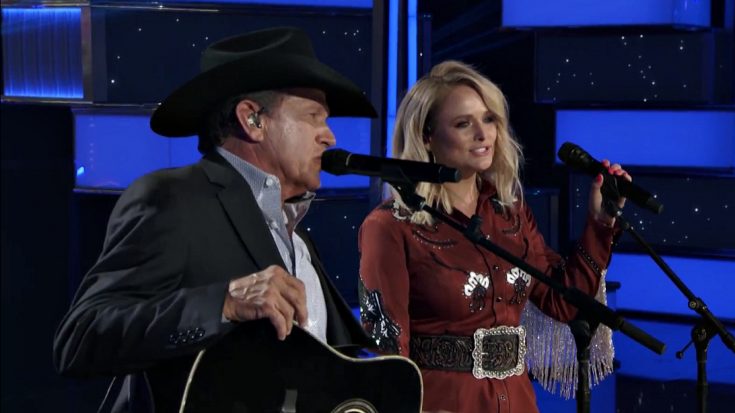 One of country music’s most anticipated events took place in Las Vegas Sunday night (April 7) as the genre’s biggest stars gathered for the 54th Academy of Country Music Awards. The announcement of the award winners is a highlight, but fans might argue that the epic performances are the real stars of the show.

Sunday’s event featured a collaboration between George Strait and Miranda Lambert that reminded us why George is the King of Country. The pair teased their performance earlier in the day by sharing photos from their rehearsal at the MGM Grand Garden Arena. Fans couldn’t help but notice that King George wasn’t sporting his signature cowboy hat and boots during the practice run.

Sneak peek of tomorrow's #ACMawards performance with @mirandalambert! Tune-in tomorrow at 8/7c on CBS to see what we've been rehearsing. ?: Timothy Kuratek/CBS

Strait swapped his tennis shoes and baseball cap for his cowboy look before he took the stage Sunday night. He and Miranda were one of two pairs of classic and current artists who entertained with an ACM Throwback Performance. The duo sang George Strait’s 2001 hit “Run.” The song was the lead single for his twenty-first studio album The Road Less Traveled.

It wasn’t the first time Strait and Lambert had shared a stage. In 2014, Lambert joined the country legend for his Cowboy Rides Away Tour finale at AT&T Stadium in Dallas, Texas, where they sang “Run.”

Despite their history, Lambert admitted that she still gets a little “glossy eyed” every time she shares the stage with George. “I get to sing with the King, George Strait. I get a little glossy eyed every time I sing with him, so I’m excited,” Lambert said during rehearsals.

With dozens of ACM Award wins between them, George Strait and Miranda Lambert’s collaboration at the 54th Academy of Country Music Awards show was one for the ages. Hear their powerhouse duet in the video below.