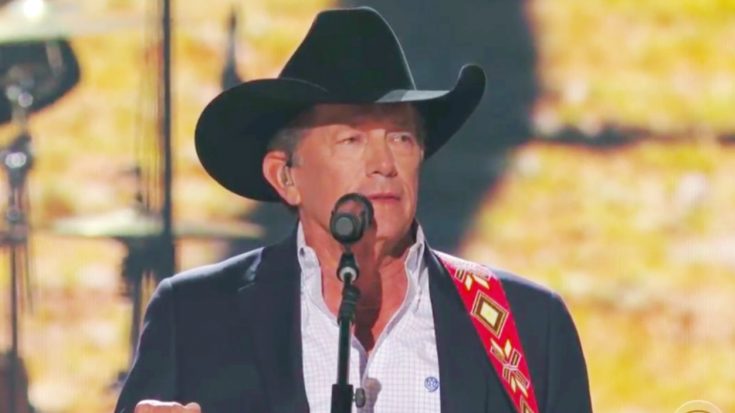 It was revealed weeks before the ceremony that “The King of Country” would be returning to the ACM stage for the first time in four years as one of the scheduled performers. A little later, the ACM announced he not only would be singing solo, but that he would also be performing with Miranda Lambert.

During the show, the two Texans teamed up to sing Strait’s iconic hit “Run,” and fans loved every second of it.

Favorite moment of the night ??

This didn’t mark the first time that Strait and Lambert had ever performed together. They’ve actually collaborated a number of times, and “Run” seems to be their go-to song.

Back in 2014, the two were filmed singing “Run” and “How ‘Bout Them Cowgirls” during a concert that took place in San Diego, California.

But even though Strait and Lambert have experience singing together, the two still needed to rehearse before their ACM Awards collaboration.

See Strait Without His Signature Attire

I was during that rehearsal that Strait was caught in a rare state…he wasn’t wearing his signature cowboy hat or boots!

While it isn’t unheard of for Strait to step out without his cowboy hats or boots, it is a pretty uncommon thing. Hence the reason why fans freaked out in February when Strait shared a throwback photo of himself wearing a suit and no cowboy hat.

Since a it’s such a rare sight to see Strait without his cowboy hat and boots, we bet you’ll be a bit surprised to see how he dressed for his ACM Awards rehearsal with Lambert.

Although Strait was not wearing his iconic cowboy hat, he was still sporting some headwear. He wore a white ball cap with a pair of dark sunglasses perched on top.

As for his footwear? He traded in his boots for some quite comfortable-looking sneakers.

Sneak peek of tomorrow's #ACMawards performance with @mirandalambert! Tune-in tomorrow at 8/7c on CBS to see what we've been rehearsing. ?: Timothy Kuratek/CBS

There’s even more than a still image from this rare occasion!

The ACM filmed a portion of the duo’s rehearsal, so you can see a hatless, bootless Strait in motion. As short as the video is, just seconds of seeing Strait without his signature attire will blow your mind.

You can go ahead and check out that video below. Also, just enjoy the sound of Strait and Lambert’s voices together!

No matter what he wears, Strait is still country through and through!