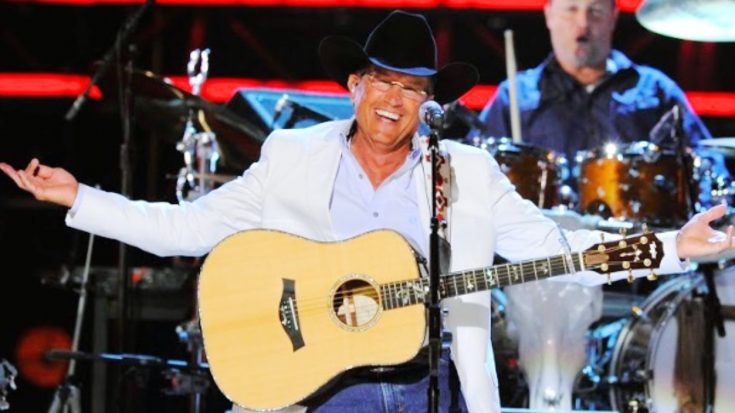 How George Became A Rodeo King

Although George Strait retired from touring some years ago, he stills performs from time to time. Since he doesn’t travel much for concerts any more, fans who want to see “The King of Country” best head to Vegas, since he has a residency there.

This year, Strait decided to put on a few non-Vegas shows at well, including one in his home state of Texas during the famous RodeoHouston season. But his concert wasn’t just an ordinary part of the program…he was the event’s closing act.

Just as Strait has reigned over country music, he has a similar legacy in RodeoHouston. He has performed there a total of 30 times, starting in 1983 when he stepped in for Eddie Rabbitt who fell sick hours prior to his performance and needed a last-minute replacement.

Strait was new on the scene at the time, but by the end of the night, he had thousands of fans praising him as superstar artist.

“This good-looking, handsome cowboy comes out with starched jeans and starched shirt, cowboy hat, and starts singing to the crowd,” Jim Bloodworth, former chairman and president of the Houston Livestock Show and Rodeo told ABC 13 News out of Houston. “He’d look right in the camera and smile, and the girls went crazy. He had them for the rest of the night.”

Many performers have stepped on the RodeoHouston stage since then, but for the past six years, it was Strait who held one of the events most prestigious records.

RodeoHouston separates its events with certain designations. Some artists perform while rodeo events are occurring at the same time, while other artists just host a concert without the rodeo events.

“The NRG Stadium record is separate from the Paid Rodeo/Concert attendance records, as this is a concert-only performance with additional seats on the floor of the stadium,” said NRG Stadium, the venue that hosts RodeoHouston, in a press release obtained by ABC 13 News.

The record that Strait held on to since 2013 was the attendance record for a concert-only event. That year, 80,020 people turned out to watch “The King of Country” perform alongside the Randy Rogers Band and Martina McBride.

Strait’s record remained unbroken for the past six years, leading many to believe that it would be impossible for another artist to ever surpass it. But if anyone can break a record set by Strait, it’s Strait himself.

That’s exactly what he did when he performed at RodeoHouston this year. He broke his own record by selling a whopping total of 80,108 tickets to his show. Now that’s impressive!

Since no one was able to break Strait’s previous record before he came along again, we have a feeling his new record will stand for quite some time. He’s unstoppable at this point!

If you weren’t one of the lucky 80,000+ people who got to attend Strait’s closing performance at RodeoHouston this year, don’t fret. We have a clip of part of his concert below for y’all to enjoy!