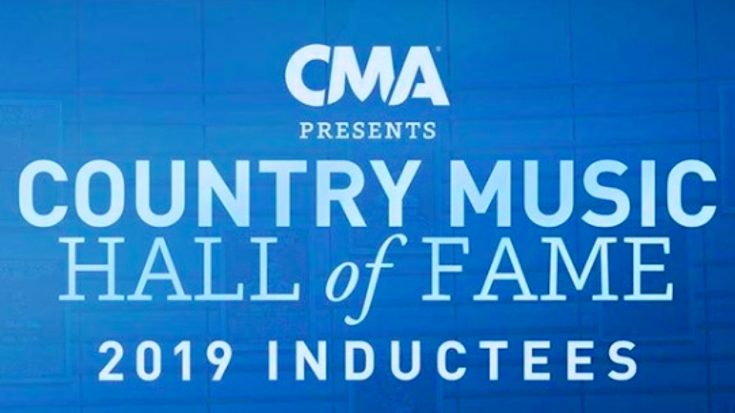 A Big Day For Country Music

It’s the day that hard core country music fans wait for all year…the day that the Country Music Hall of Fame reveals its annual class of inductees. Over the years, country music’s most iconic figures have found themselves immortalized in the HOF, with some notable members being Patsy Cline, Garth Brooks, and Alan Jackson.

But the HOF doesn’t hand out membership to just anybody. There are strict rules and guidelines in place to ensure that the membership remains elite, and that its members are inducted based on merit, rather than pure popularity.

Tomorrow at 10 AM|CT, we're announcing the 2019 Country Music Hall of Fame inductees LIVE on YouTube. Be the first to find out who will receive Country Music's highest honor! ✨ #HonorThyMusic @CountryMusicHOF https://t.co/Rfk0l2Ugkn pic.twitter.com/ayQd3NIRbP

There are three categories the HOF separates potential inductees into: Modern Era Artist, Veterans Era Artist, and Non-Performer, Songwriter, and Recording and/or Touring Musician. The latter category rotates every three years, so the 2019 inductee falls under the “non-performer” label.

Who Is Elected & How?

In the early 1970s, Dottie West wrote a popular commercial for Coca-Cola, titled "Country Sunshine", which excelled to #2 on Billboard's Hot Country Singles in 1973. Then in the late 1970s, she teamed up with country-pop superstar, Kenny Rogers for a series of duets which took her career to new highs. West began earning Platinum-selling albums and #1 records for the very first time. #MemberMonday

Member Reba McEntire was originally given the honor of introducing the inductees, but came down with a strep infection and was unable to attend. Opry announcer and Disc Jockey Hall of Fame member Bill Cody took her place at the last minute.

First, Cody revealed the name of the non-performer inductee. It was none other than the esteemed producer and record executive Jerry Bradley, who has worked with artists such as Dolly Parton, Charley Pride, and Alabama.

Known for helping artists cross over to pop and helping them cross back from pop to country, Bradley was one of the most heavily relied on producers in the business. Many of the artists he worked with went on to become Hall of Fame Members, and now Bradley is one himself.

The first new member of the Country Music Hall of Fame's Class of 2019 is producer Jerry Bradley in the Non-Performer category. pic.twitter.com/BoiIAAIt7N

“This is the greatest honor anyone could receive in country music,” he said.

It is also a great honor to Bradley to be inducted, as his father, Owen Bradley, and his uncle, Harold Bradley, are also members. As Bradley went to speak about how honored he’ll be to see his name beside theirs, he broke down, asking Cody to finish reading his speech.

Next, Cody announced the 2019 Veterans Era inductee into the HOF. It soon became obvious as he talked about the artist’s well-known comedic side that he was recognizing the great Ray Stevens!

Known for hits such as “The Streak,” “Everything is Beautiful,” and “The Mississippi Squirrel Revival,” Stevens is a Grammy-winning artist known as the greatest comedic singer in the world.

Congrats to Ray Stevens! He's the newest Inductee into the Country Music Hall of Fame! pic.twitter.com/hd4yA1xkOB

Stevens only spoke briefly upon being named as an inductee, but was clearly overwhelmed by the honor. He promised he would have plenty more to say as the news of being a new HOF member takes its time to sink in.

Finally, Cody named the 2019 Modern Era inductee into the HOF. He made it clear that not one, but two people would be inducted, as he said the word “duo” before revealing the names of the artists involved.

As soon as he said how many hits this duo had together, it was clear that he was talking about Brooks & Dunn! With 20 number one singles and a record-breaking number of wins in the CMA’s Vocal Duo of the Year category, Brooks & Dunn are known worldwide as one of the greatest duos in country music history.

The induction comes at the perfect time for the duo, who retired some years back, but reunited in 2014 to perform with McEntire in Vegas. Now, they’re preparing to release their first album in years, titled Reboot, which will feature updated versions of their signature hits.

“It hasn’t soaked into me, and it probably will. Sometime, when I’m off by myself, I’ll have an emotional moment, I’m sure,” a teary-eyed Ronnie Dunn said before turning things over to Kix Brooks.

The entire event was definitely an emotional one for all involved…

Congratulations to all of the inductees! You can watch the HOF’s full inductee reveal by tuning in to the video below.