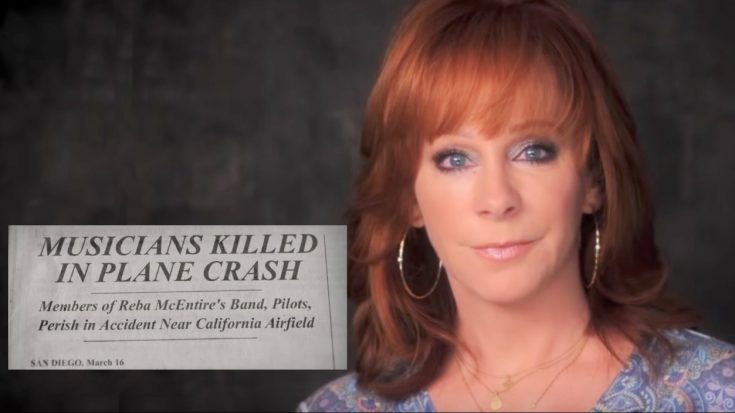 Reba McEntire was at the top of her game when her album Rumor Has It was released on August 17, 1990. The album peaked at number two on the Billboard country album chart, and became her very first album to enter the mainstream Top 40, peaking at number 39 on the Billboard 200 chart. Rumor Has It produced four singles, “You Lie,” “Rumor Has It,” “Fancy,” and “Fallin’ Out of Love,” all of which peaked in the Top 10, with “You Lie” going number one.

Like she always does, McEntire went on tour to support Rumor Has It, and the tour took her and her band to San Diego, California, where they performed a private concert for an IBM company conference at the Sheraton Harbor Island Hotel.

The plane was estimated to have taken off on March 16, 1991 at 1:45AM at Brown Field Municipal Airport. The crash killed everyone on board including the two pilots. McEntire was incredibly close to each member of her band, and considered them part of her family.

She often pays tribute to her friends on the anniversary of the plane crash.  In 2015, she was actually in San Diego and took a helicopter to the plane crash site to pay her respects.

“I feel in my heart that they know we still miss them so much,” she wrote.

Today is the 25th anniversary of the airplane crash. I went back to San Diego Nov of last year and took a helicopter up to the crash site. I feel in my heart that they know we still miss them so much. My love and prayers to all the families and friends.

The following year after the crash, McEntire released an album titled For My Broken Heart and dedicated it to her friends who lost their lives. The album debuted at number one of the country albums chart, and reached number 13 on the Billboard 200.

The plane crash March 16, 1991 took the lives of my friends. They will never be forgotten.

This year, on the 28th anniversary of the crash, McEntire took to social media to pay her respects to her fallen bandmates.

“28 years ago today….If I had only known. Rest in peace my friends,” she captioned the photo of a Heavenly sky.

28 years ago today…If I had only known. Rest in peace my friends.

Even though all this time has passed, not a day goes by where she doesn’t miss them. Our hearts go out to McEntire and her band members’ families. Watch her heartbreaking interview about the crash in the video below.