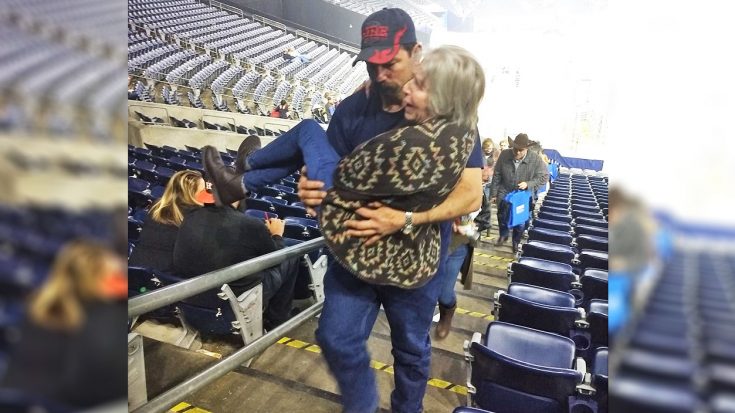 One Texas man just showcased the ultimate act of kindness after a night at the RodeoHouston. While he attended a rockin’ Brad Paisley show, this Good Samaritan may have just become the star of the show – for the best reason.

On Saturday, March 16, Brad Paisley took the stage ready to give fans the show of a lifetime. As he serenaded fans with love songs and breakup anthems, the crowd went wild.

Playing @rodeohouston is always one of the most incredible experiences a band can have. Hope you had as much fun as we did!

Following the performance, as guests made their way out of the arena, one woman had trouble leaving. Luckily, a gracious man noticed.

Thomas Harwell, a volunteer firefighter, was attending the show with his wife, Shayla when they noticed an elderly woman having a hard time making her way down the rodeo stairs. As the woman tried to get down the stairs alongside her daughter and two granddaughters, it was obvious she was in pain.

Unfortunately, it turns out, the grandmother had recently suffered a stroke and was fighting cancer, as her granddaughter told ABC News.

Harwell approached the woman and told her that he would help her out of the arena – but she never could’ve expected how far he would go. As the show came to a close and concert-goers exited, Harwell picked up the elderly woman and carried her up the flights of stairs.

Y'all I have to brag on my husband big time tonight! He made me Soo proud. As we were sitting in our seats waiting for…

The courageous act caught the eyes of bystanders everywhere – including Harwell’s wife who caught the moment on camera. She captioned the photo,

“Y’all I have to brag on my husband big time tonight! He made me Soo proud.” Continuing to tell the story of her husband’s humble moment.

We are so glad this act was documented – Thomas Harwell deserves all the praise for this beautiful moment. His wife and children are so lucky to have him!