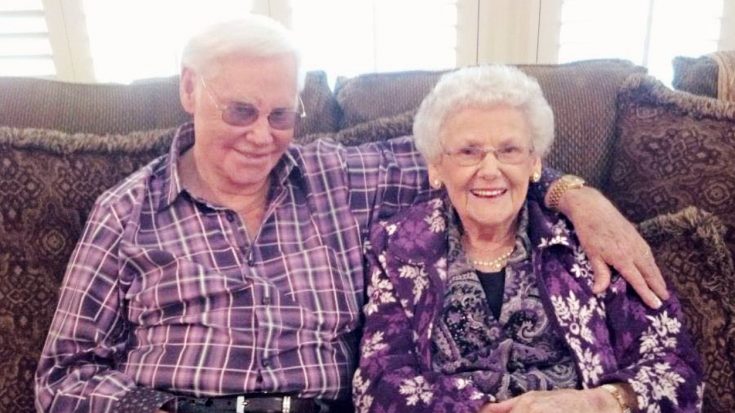 Growing Up In The Jones Family

Growing up in Colmesneil, Texas, George Jones had no shortage of playmates to spend time with. That’s because his parents, George Washington and Clara Jones, had six other children (one son and five daughters) in addition to young George.

Along with his brother and sisters, George was raised by Clara in the Baptist church. While Clara obviously loved all of her children, she showered George with endless affection.

“My mama,” George once told Texas Monthly, “loved me more than anybody ever did.”

While George’s father played harmonica and guitar, it was through Clara that George discovered his own passion for music. Clara played piano in church every Sunday, ensuring that George and his siblings always had music in their lives.

Years after George found his claim to country music fame, he lost his beloved mother. Clara passed away on April 13, 1974, at the age of 78 years old.

Although George lost Clara, there was someone else in his life who was like a mother to him. That someone was his sister Helen.

Over the years, George’s brother and four of his sisters have passed away, leaving Helen as the last Jones sibling living. Sadly, George’s team announced on Sunday (June 24), that Helen just passed away as well.

She ‘Loved Him Dearly’

George’s team took to his Facebook to reveal that Helen had passed away earlier that morning. They wrote a short note about her, noting how she was a mother figure in George’s life and that she “loved him dearly and was a very sweet woman.”

In addition to announcing the news of Helen’s death, George’s team also shared a few photos of her. One is of only Helen, while the other is a snapshot with George. They both looked so happy to be in each other’s company.

We are saddened to hear that this morning, George’s only living sister, Helen Scroggins, passed away. Like a mother to George, Helen loved him dearly and was a very sweet woman. She lived in Woodville, TX.

The comments section of the post filled up with condolences for the Jones family and all who knew and loved Helen. We too join in sending our prayers to all of her loved ones.