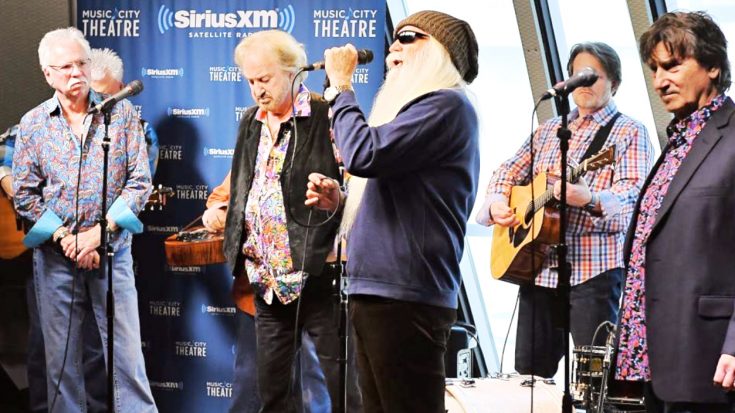 Sadly, the members of the Oak Ridge Boys are mourning the loss of one of those friends today.

That friend was Richard Harrison, the patriarch behind the family that runs the Gold & Silver Pawn Shop in Las Vegas. That shop eventually became the focus of a popular reality series called Pawn Stars, which has been running for 15 seasons and counting.

Known as “The Old Man” on the show, Richard was beloved and respected by his family, employees, and many fans.

Richard Benjamin ‘The Old Man’ Harrison passed away this morning surrounded by those he loved. He will be tremendously missed by our family, the team at Gold & Silver Pawn and his many fans the world over. He was my hero and I was fortunate to get a very cool ‘Old Man’ as my dad. That I got to share him with so many others and they got to see what a great family man he was is something I am grateful to have experienced with him. He lived a very full life and through the History television show ‘Pawn Stars’ touched the lives of people all over, teaching them the value of loving your family, hard work and humor. We appreciate everyone’s thoughts and prayers and ask that we are provided some privacy at this time.

Richard’s son and fellow Pawn Stars cast member Rick Harrison wrote in the Instagram post above that his father passed away on Monday (June 25) “surrounded by those he loved.” In a separate post, he wrote that his father “lost his long battle with Parkinson‘s.”

He then went on to write a heartfelt tribute to his father, talking about how much of an impact he left on the world:

“He lived a very full life and through the History television show ‘Pawn Stars’ touched the lives of people all over, teaching them the value of loving your family, hard work and humor.“

Just four of the many lives he touched were those of Jon Bonsall, William Lee Golden, Richard Sterban, and Duane Allen, the four members of the Oak Ridge Boys.

The boys acknowledged Richard’s passing on their official Twitter account, writing “He was a dear friend and will miss him.”

Rest In Peace Richard Harrison… He was a dear friend and will miss him … via @SashaFB Richard 'Old Man' Harrison of 'Pawn Stars' dead at 77 – Fox Newshttps://apple.news/A7O3bxl1YQi6-s_bs9eFfuQ

Joe Bonsall also took the time to acknowledge Richard’s passing on his own Twitter account. He said that they “all loved the Old Man.”

This is so very sad… We all loved the Old Man… Rest Easy sir… #NavyVet https://t.co/jJFDEB7vTK

Joe paid further tribute to his friend by sharing a photo that one Oak Ridge Boys fan posted. The photo shows Richard posing for a selfie with a few guys who happened to run into him at an Oak Ridge Boys concert a few years back.

Sad to hear the @pawnstars Old Man has died. Met him a few years ago in Vegas after an @oakridgeboys concert. Such a nice guy!! pic.twitter.com/ukXk0sneHW

Clearly the Oak Ridge Boys and many others are heartbroken over Richard’s death. At a sad time such as this, we can think of no better song to share than the Oak Ridge Boys’ “Brand New Star,” off of their latest album 17th Avenue Revival.

The song, though seemingly upbeat, is actually a song of mourning. In it, the Oak Ridge boys sing of someone who is now gone, but is now “a brand new star up in heaven.” Listen to that song below.

Our hearts and prayers go out to all of “The Old Man’s” family and friends.