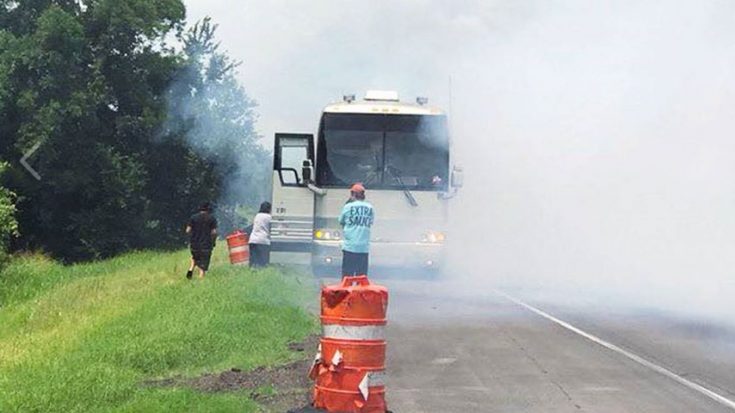 Every music group would like to say they’re on fire based on ticket sales and over-the-top performances. But, no one ever wants to smell smoke and hear the cry, “BUS FIRE!!” especially if you’re the drummer relaxing in a bunk on the smoke-filled bus.

BUS FIRE!! It’s never a dull moment out here with Shenandoah. Our bus caught on fire this morning in Forest City AR but we got it put out. Now to get home!

That’s just what happened to Marty Raybon, Mike McGuire and their Grammy, ACM and CMA Award-winning band and crew. Shenandoah, currently on their 30th Anniversary tour, was rolling down the interstate when the frightening incident occurred.

“It’s never a dull moment out here with Shenandoah,” the band shared on social media. “Our bus caught fire this morning in Forest City, AR but we got it put out. Now to get home!”

We Can Joke About It Today

Lead singer Marty Raybon can joke about the incident today, but only after he knew for sure that everyone was okay.

The Guys Are Safe

“It’s one of the things you always know is possible,” Raybon told PopCulture.com. “You certainly never want it to happen, but it does and it did. The biggest concern is the safety of the guys we run the highways with. The bus is just a piece of machinery that gets you from one point to the other. So truly grateful no one was injured and the Lord was watching over us. I don’t want us to ever keep the road that hot again. I do say that with a hardy chuckle!!!”

“I was in my bunk and I woke up to Marty yelling for everybody to get off the bus NOW!” added drummer Mike McGuire. “We came to a screeching halt and before we could get out, the inside of the bus was filled with smoke. Luckily we were able to put the fire out with extinguishers.”

Wow – grateful to all who helped!

Firefighters and First Responders were able to smother the flames and stop the fire from spreading, but the band was unable to board the bus again due to the extreme amount of smoke. The fire is believed to be the result of a faulty turbo.

On The Road Again

Shenandoah was back on the road in a replacement vehicle after the smoke cleared. The group will continue its 30th anniversary tour through November. Their most recent release is their live album, Reloaded which dropped on March 16.

The show must go on. Be safe out there!

Take a look at the video featuring Shenandoah singing one of their greatest hits! We’d love to have your comments.