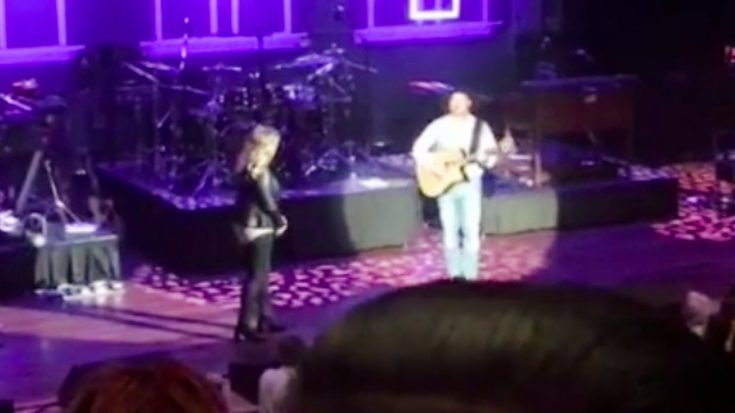 Although Garth Brooks and Trisha Yearwood performed together all the time on Brooks’ World Tour, prior to their Christmas album the couple had only recorded one duet together.

That song, called “In Another’s Eyes,” was released in 1997 and was included on Yearwood’s greatest hits album.

But finally, Brooks & Yearwood debuted a new, non-holiday duet, and they shared it with fans during a performance at the Ryman Auditorium on September 8, 2016.

This Duet Is Intoxicating

Called “Whiskey to Wine,” the duet is both romantic and heartbreaking, as it discusses a passionate love lost between two people. Brooks starts off singing first, describing a new love in his life who is nice and good to him.

But, he reveals that being with his new love is like transitioning from “whiskey to wine” after having been with his old flame.

Yearwood and Brooks sing together on the chorus before Yearwood takes over the second verse.

Get Ready To Get Hooked

Her part follows the same tune as Brooks’, as she sings about a new love who is refined and perfect in every way. But as she goes on, she reveals that she just doesn’t feel the fire for him like she did for her lost love.

The song is stunning just from a lyrical standpoint, but Brooks and Yearwood really bring it to life.

They sing passionately and with great emotion, which helps draw you in to the story they tell through the song. Plus, when they sing together on the chorus, their harmonies are breathtaking.

We’ve waited forever to hear a new song from Brooks and Yearwood, so we can’t get enough of this duet! Hear it for yourself in the clip below, and let us know what you think.