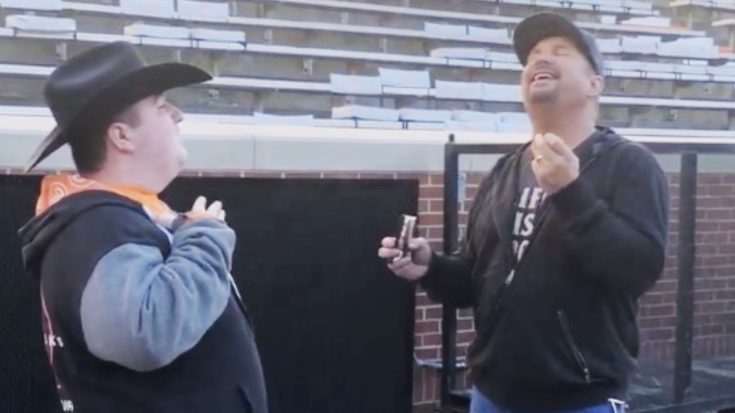 Before the gates opened for his November 16 stadium tour stop at the University of Tennessee’s stadium, a lucky fan got to meet Garth Brooks.

21-year-old Will Gotts, along with his parents, were able to spend some time with the reigning CMA Entertainer of the Year before the show.

According to Fox 28, Will has autism and his mom, Tracy, said he is “intellectually delayed.” At 21 years old, this is his last year in high school after spending six years in Mrs. Hawthorne’s special needs class at Sullivan South High School.

Will has always wanted to meet Garth Brooks, so when it was announced that’d he’d be playing at the UT stadium, some of Will’s friends wrote into their local radio station in Knoxville. Tracy told Fox 28 that the radio station forwarded everything to Brooks’ people and not long after, Chuck, Garth’s road manager called Tracy to set up a meeting between the two musicians!

Moments after Will and Garth met, Tracy asked her son if he wanted to sing something for Garth. He immediately broke out into “Unanswered Prayers,” which put a big smile on Garth’s face. Garth joined in here and there making it a lovely duet!

Will talking to Garth at UT stadium ! ???

What an incredible memory we’re sure both of these men will remember forever!

HEARTWARMING: Will Gott, a Garth Brooks fan from the Tri-Cities area with special needs, got to meet and sing with Brooks before his concert at Neyland Stadium tonight! Will's family says he has sung Garth Brook's songs for years at church and school functions!Courtesy: Tracy Gott