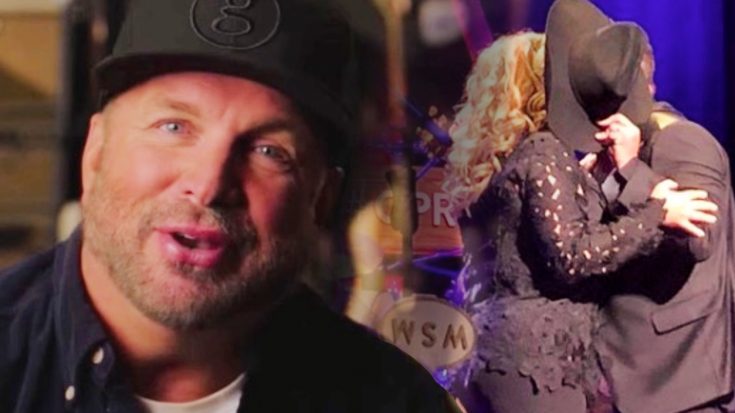 Tuesday (March 12) marked a big day in Trisha Yearwood‘s life and career. On that day, the superstar country singer celebrated her 20th anniversary as a member of the Grand Ole Opry.

20 years has flown by, so excited to celebrate with you all tonight @opry!

Yearwood was inducted into the Opry on March 13, 1999, after being invited to join its elite membership by Ricky Skaggs.

She was later inducted by the great Porter Wagoner, who himself had been inducted over 40 years prior.

Her induction came nine years after that of her future husband Garth Brooks, who became an Opry member on October 6, 1990 after being inducted by Johnny Russell.

Since then, Brooks has been on hand to either induct or invite new members into the Opry. Most recently, he sang the praises of Chris Janson on his induction day on March 20, 2018.

So when it came time for Yearwood to mark her 20th anniversary as an Opry member, there was no doubt that Brooks would be involved in the celebration. He was in the house as Yearwood was honored throughout the night, surely beaming with pride as he watched from his seat.

But Brooks didn’t remain in the crowd the entire night. At one point he came up and joined her on stage, and the two shared a romantic moment in front of the crowd.

Holding up his signature cowboy hat to cover their faces, Brooks leaned over and gave his wife of 13 years a congratulatory kiss. The moment was caught on camera, and Brooks later took to social media to share a photo.

I’m lucky that she’s in love with the boy. @TrishaYearwood the @opry is lucky to have you … and so am I!! love, me

But that wasn’t the only way that Brooks helped Yearwood celebrate her special day! He joined forces with the Opry and some of Yearwood’s dearest friends to film a surprise video congratulating her on her membership anniversary.

A Surprise Video From A Few Special People

The other artists who contributed to the video were Kelly Clarkson, Reba McEntire, and Brenda Lee. Brooks’ message was saved for last, and it was as sweet as could be.

Pouring his heart out, Brooks congratulated Yearwood and praised her as an artist:

Doesn’t that make your heart melt? You can watch Brooks’ full message to Yearwood along with the other artists’ by tuning in to the Opry’s surprise clip below.

We’d like to join them all in congratulating Yearwood on her grand accomplishment!