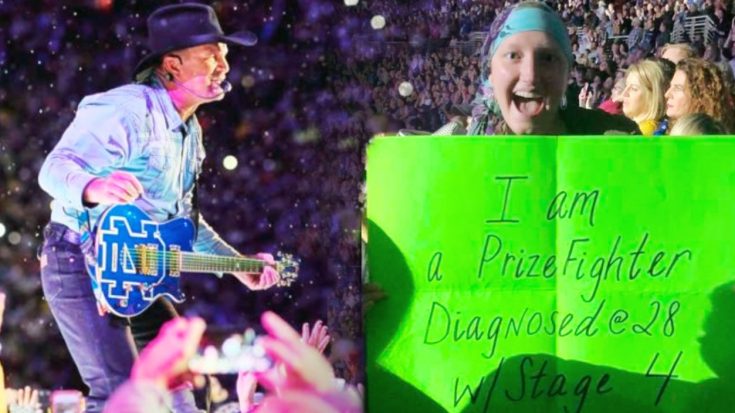 Back in October 2018, Garth Brooks made a huge announcement – he would be embarking on a stadium tour! He admitted that he wanted to call it “The Big Ass Stadium Tour,” but settled for just Garth Brooks Stadium Tour.

He revealed the tour would kick off in St. Louis and was extremely excited to get back to Missouri!

Well, it’s been months since Brooks announced the stadium tour, and it finally kicked off on Saturday, March 9 at The Dome at America’s Center!

Brooks played a 20-song set that included his biggest hits, plus a couple of his favorite covers for his 75,000 person audience. After singing the final song “The Dance,” he came back out to perform a 10-song encore.

During that encore, he took some time to read a few of the signs that his fans were holding up. He stopped in his tracks when his eyes fixated on Section 151, where several concertgoers were shining their phone lights on a neon green poster. It was a little too far for him to read, so he asked his fans what the sign said.

Someone finally told him that the sign said, “I am a PrizeFighter diagnosed @ 28 w/ Stage 4.”

It was being held up by a 29-year-old woman named Tahler Wildman, who was diagnosed with stage four breast cancer nearly a year ago. She was visibly emotional as Brooks was talking to her.

“You have all of our strength,” Brooks said. “Some people take on adversary … they find it and they take it on. I’m telling you right now, with everything you’ve got left in you — family and everybody — you just start kicking its ass.”

The song “PrizeFighter” that Wildman referenced on her poster is a Trisha Yearwood song that features Kelly Clarkson. It was included on her 2014 compilation album PrizeFighter: Hit After Hit, which featured ten of her hit singles, and six new recordings.

Trisha Yearwood's Prizefighter: Hit After Hit is such a great nod to her legacy, w a few new ones. Out 11/17! pic.twitter.com/m1sFo8xQk7

The inspiring song starts with the lyrics, “Here you are face to face, with your greatest test of faith,” which Wildman definitely is.

“When you hit the ground, you find your wings
You go one more round when that bell rings
They say you’re done, but here you come
You’re a hammer hittin’, spittin’ fire, PrizeFighter“

After hearing the song, it’s no surprise why Wildman considers herself a PrizeFighter.

Final Song of the Night

After telling Wildman to kick cancer’s ass, Brooks said, “You know what? I might have the song for you. Let me see.”

Brooks started playing an acoustic rendition of “Standing Outside The Fire” dedicated to Wildman and it turned out to be the final song of the night.

“St. Louis THANK YOU for giving me the BEST night that I’ve had in a long, long time!” he wrote on Facebook.

St. Louis THANK YOU for giving me the BEST night that I’ve had in a long, long time! love, g #GarthInStLouis

We’re sure Tahler Wildman was one of the reasons it was the best night he’s had in a long time! Watch his entire interaction with Wildman, her sign, and performing “Standing Outside The Fire” for her.