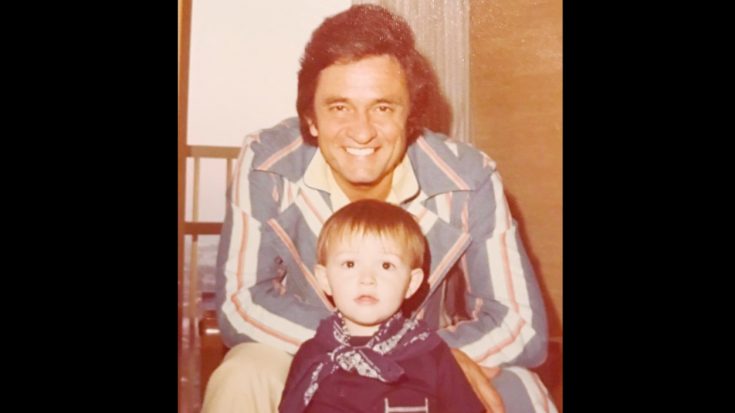 A Grandson With His Grandpa’s Voice

The children and grandchildren of many country music artists have gone on to become singers themselves: Loretta Lynn‘s granddaughter Tayla, Waylon Jennings and Jessi Colter‘s son Shooter, and Toby Keith‘s daughter Krystal are just a few examples.

While there are many country music kids who follow in their parents’ or grandparents’ legendary footsteps, few actually sound like their famous relatives. But one grandson of a country music icon is an exception.

Music runs deep in the blood of Johnny Cash‘s family. His daughter, Roseanne, is a singer, while his son John Carter Cash, is a singer and esteemed producer. All of his other daughters have dabbled in music as well, and even joined their father on stage before.

Johnny’s daughter Kathy was the first of his children to make him a grandpa when she gave birth to a son named Thomas Gabriel. As Johnny’s first grandchild, Thomas developed a close and special relationship with “The Man in Black” from an early age.

Growing up under Johnny’s influence inspired Thomas’ own love of music. Johnny would even bring him up on stage at some of his shows to have him sing “When the Saints Go Marching In.”

Thomas as a child with his grandfather, Johnny Cash.

Little did anyone know that Thomas would one day go on to develop that same signature singing voice that his grandfather had become so famous for. Johnny recognized that sound in his grandson’s voice when he was 21, and encouraged him to work on it.

“Son, you sound a lot like I did when I was younger; work on those vocals,” Thomas recalls his grandfather telling him on one occasion.

So work on those vocals he did, and today, Thomas is an exact sound-alike of Johnny. When you hear him sing the songs that made his grandpa famous, you’ll be amazed at how similar their voices are.

A perfect example of how Thomas captures his grandpa’s sound is his performance of “Folsom Prison Blues.” The particular clip we have to share here with y’all was captured during a private event in the summer of 2018.

You’ll find the video of Thomas singing that same song below.

It would be fun to try a little experiment on someone who doesn’t have any context…play both videos for them but have them close their eyes, and see if they can guess which one is actually Johnny. They may end up picking Thomas’ video, because he sounds that much like him!

Go ahead and hear for yourself when you watch Thomas perform “Folsom Prison Blues” below. If Johnny thought that Thomas sounded just like him, then you know his voice has to be pretty spot-on!