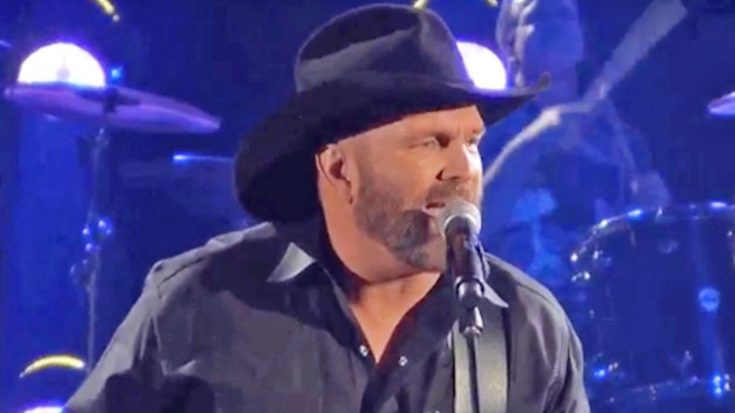 The reigning CMA Entertainer of the Year took the stage at the 51st CMA Awards to perform his latest radio single for an arena filled to the brim with people. Garth Brooks, who is nominated again for the CMA’s most coveted award, gave a performance of a lifetime with his newest single, a follow-up to the single “Baby, Let’s Lay Down And Dance.”

Brooks released “Ask Me How I Know” on March 17, 2017, as the second single to his album Gunslinger. It became his first top ten hit since 2007’s “More Than A Memory.” The single was written by singer-songwriter Mitch Rossell, who Brooks can’t stop raving about.

“When I heard this song I just wore it out,” the five-time CMA Entertainer of the Year said of the track. “Mitch Rossell has one of those voices that spins your head around the second you hear it, but that is only the beginning. Once he has your attention, get ready for some of the best lyrics and melodies you ever heard.”

Brooks started out the first verse slow and steady before crescendoing into the powerful chorus with incredible harmonies accompanying him.

He proved once more why he is nominated once again for Entertainer of the Year with his energetic performance. Rossell was playing guitar and singing backup for Brooks and in the middle of the song, Brooks motioned to him to come closer and share his mic with him!

Watch his performance of “Ask Me How I Know” below.