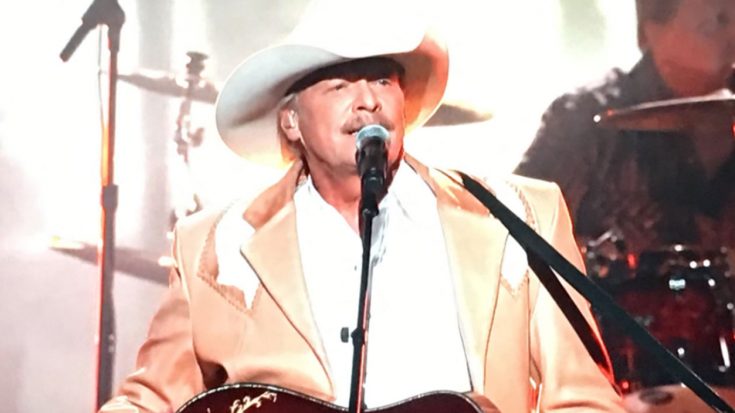 One of the 2017 Country Music Hall of Fame inductees proved – yet again – why he is considered a country legend.

Alan Jackson was on hand at the 2017 CMA Awards for the second year in a row and put on a performance that people will be talking about for a long time! In 2016, he and George Strait sang “Remember When” and “Troubadour” for the epic 50th Anniversary show.

This time, Jackson returned to perform his classic song “Chasin’ That Neon Rainbow” and everyone was absolutely loving it.

“Chasin’ That Neon Rainbow” was released in September 1990 as the fourth single from his very first album, Here in the Real World. The song peaked at number two on the charts and has since become a fan favorite.

Jackson delighted the star-studded audience with his silky smooth voice and had the likes of Lauren Alaina, Miranda Lambert and Tim McGraw swaying to his music. Even fans at home were enjoying it! Check out some of their reactions on Twitter.

@OfficialJackson I am SO thankful to see you on the CMA's tonight doing 2 songs. I am disappointed with most country today. Love you, @Travistritt @martystuarthq @randytravis and real country with values. #CMA

Alan Jackson is most def my all time favorite. Dude is genuine and just flat good.

No one will ever have the cool factor of Alan Jackson and George Strait in modern country. Effortless, easy..a guitar, a hat and a great voice.

Not only did Jackson perform “Chasin’ That Neon Rainbow,” he closed out the show by performing “Don’t Rock The Jukebox” with the help of co-hosts Brad Paisley and Carrie Underwood.

Watch his performances at the 2017 CMA Awards below.