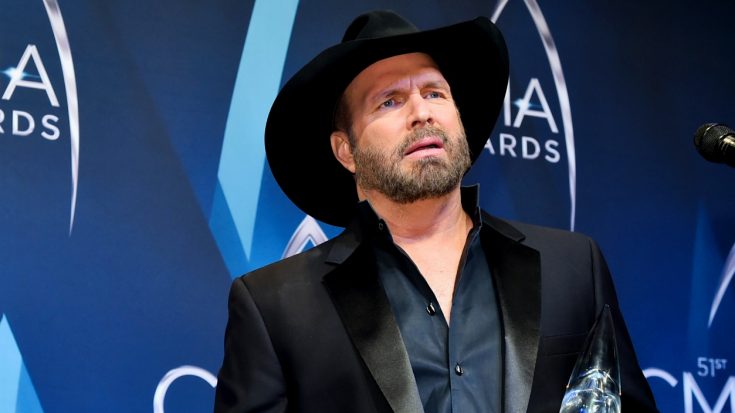 Already one of the biggest winners in the history of the CMA Awards, this country music icon had told fans before that there was only one condition under which he would be performing this year – and he summed it up by saying that he and wife Trisha Yearwood were “just coming to attend.”

Garth Brooks has been known throughout the world of music for his incredible legacy of musical standards, chart-topping hit songs, and timeless ballads that speak to everyone’s deepest emotions. On top of that, he’s also been one of the most-awarded and successful musicians to ever exist.

Garth broke his own record, selling 5 MILLION TICKETS in just 60 cities! Join him LIVE from Allentown for #StudioG in 1 hour -Team G pic.twitter.com/gSp0DhG0si

The current reigning CMA Entertainer of the Year, Brooks has a title to defend and he’s been steadily making his way toward that with his seemingly-endless tour, new music, and surprise performances that make him one of the world’s greatest showmen.

Yearwood, who has been accompanying her husband on his tour and performing alongside him, also works on a well-loved cooking show, a line of home and kitchen products, and even carved out some time to work on her first solo studio album in more than ten years!

What better way to kick off #GARTHatND!!

Because of their tight performing bond, Brooks and Yearwood rarely are seen apart from one another, however, that doesn’t mean it’s impossible.

In a press conference during the last few weeks, Brooks opened up about being asked to perform at the CMA Awards this year – and flatly explained why it was so unlikely that he would be on the roster to perform.

Brooks, who’s an incredibly-gifted songwriter, had penned a ballad for his beloved wife and made the Country Music Association a conditional offer of performance.

“What I offered to the CMAs was: ‘Let me sing this to her that night. She hasn’t heard it and she won’t hear it until that moment – nobody will.'”

According to Brooks, the CMA wasn’t interested in including his ballad into the program this year, to which he said “Cool. I’ll find some other way for [Trisha] to hear it. So right now, we’re just coming to attend.”

Not too long after his statement at this press conference was picked up by the media, it appears that either the CMA has changed their mind – or Garth Brooks has, because he was just announced as one of the final performers lined up for the biggest night in country music!

In a post by the CMA Awards official social media accounts, they revealed an entirely new list of additional performers for a full-throttle night that will be something y’all don’t want to miss.

“Just when you thought the #CMAAwards couldn’t get any better, we’ve announced even MORE performers,” they wrote beneath the photo set.

Neither the CMA Awards nor Garth Brooks has issued any comment on the change of tune, but Brooks is typically very connected and in-touch with his fan base, so we suspect he might say something in the coming days.

Watch one of Garth’s very first performances at the CMA Awards below where he sings “The Dance.”