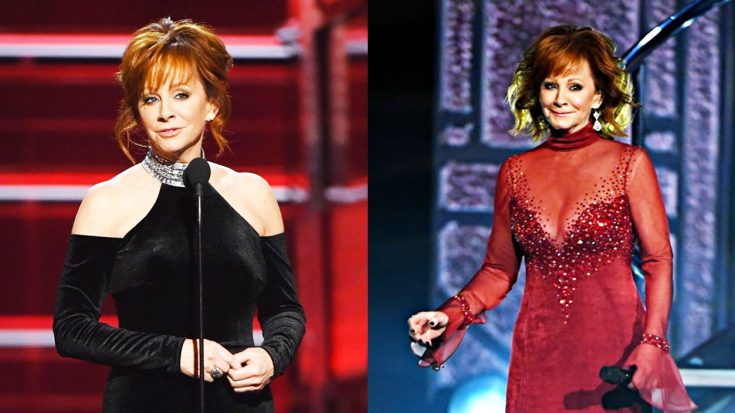 The returning long-time host and iconic country music superstar stole the show all over again in 2018 at the ACM Awards when she made a series of costume changes into seven stunning outfits. Each of the dazzling selections underscored the ageless beauty of the 63-year-old country legend.

Exit stage right, Reba reappeared in a stunning long-sleeved, beaded purple and black formfitting dress with a plunging neckline and of course, she had earrings to match.

Going from glamor to glitz, the country queen donned a blue velvet dress with extra flow around the forearms. Do angels wear blue velvet? Rhinestone straps and a similarly bejeweled neckline added emphasis to the spitfire’s spirit and entertaining presentation.

Taking to a more casual outfit, the 17-time hostess of the ACM Awards showed up in black pants, a white “I’m definitely country” fringed jacket and silvery white boots to top off the bottom.

Since it was an evening affair, Reba took full advantage and showed off her fit physique in a sleeveless black and silver evening gown. She’s never looked better and she wanted everyone to know it.

Just when you thought she couldn’t get more glamorous, the country crooner surprised everyone by reappearing in a sexy black dress that hugged her tightly in just the right places. The cut-away shoulders and ample silver necklace showed Reba remains ageless as well as timeless.

And, that’s not all, folks!

The highlight of the well-appointed outfits was the reappearance of the very same dress Reba wore while hosting the 1993 ACM Awards. How can anyone not only fit into but grace the stage in a bedazzled dress they wore 25 years ago?  Ask Reba. Evidently, she knows the secret.

What did you think about Reba’s choices for the evening?  Would you have dressed her differently?

Tell us what you think! You be the costume expert.