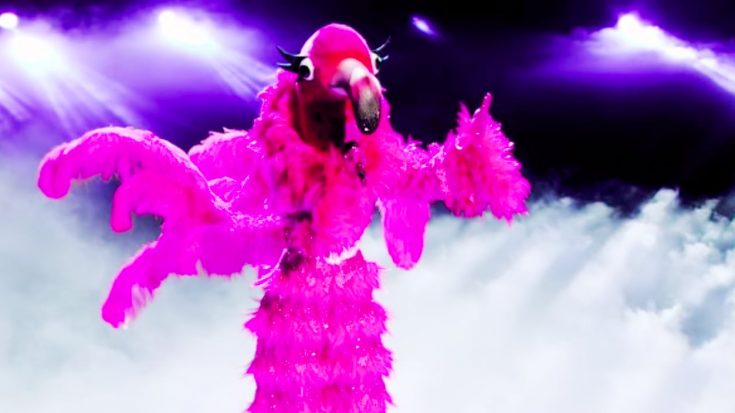 The Masked Singer‘s Season 2 semifinals aired just weeks before Christmas, so it only made sense for the masked performers to sing some Christmas tunes.

The Fox sang “This Christmas” and Thingamajig sang “Winter Wonderland,” but only one of their Christmas-themed performances helped them remain on the show.

By the end of the semifinals, Thingamajig, Tree, and Leopard were unmasked. Thingamajig was revealed to be NBA player Victor Oladipo, Tree was unmasked as SNL star Ana Gasteyer, and the Leopard was none other than Seal.

The three contestants who advanced into the finale were Fox, Rottweiler, and Flamingo.

Like the other semifinalists, Flamingo also performed a song associated with the Christmas season. The feathered singer covered Leonard Cohen‘s “Hallelujah,” which Cohen released in December 1984.

The song has become more popular over time, especially after being featured in the 2001 animated film, Shrek. It is especially popular during the holiday season, even though Cohen never intended for it to be a Christmas song.

That Christmas connection seemed to start after X Factor winner Alexandra Burke released her cover of the song in 2008. It reached Christmas Number One on the UK Singles chart after its release.

Since then, other Christmas-themed covers of “Hallelujah” have emerged. The a cappella group Pentatonix covered the song in 2016, and their rendition has nearly 500 million views.

The Flamingo had quite the legacy to live up to when they performed “Hallelujah” during the Masked Singer semifinals. But their powerful performance managed to impress the judges and the viewers at home.

Viewers flocked to social media to praise the Flamingo’s delivery. Many also shared their theories as to which celebrity could be behind the beaked mask.

A lot of viewers believe the Flamingo is Adrienne Bailon, an actress and singer known for starring in the Cheetah Girls films. That would be funny if so, because her Cheetah Girls co-star Raven was also on The Masked Singer, and was unmasked earlier in Season 2.

My dad watching the masked singer and idk what’s going on but that flamingo is Adrienne Bailon. Like she got the most recognizable voice

It's official, Adrienne Bailon is the Flamingo on the Masked Singer, if you have any doubts, just check her "Cheetah Girls" suitcase she showed on the last episode ?? pic.twitter.com/9QW7sQ0dNL

Give the Flamingo’s performance of “Hallelujah” a listen in the video below and let us know who you think is behind the mask.

And don’t be surprised if you find yourself covered in goosebumps as you watch them sing. They’re seriously that good!