“Father Of The Bride” Releasing Part 3: “No One More Excited” Than Brad Paisley 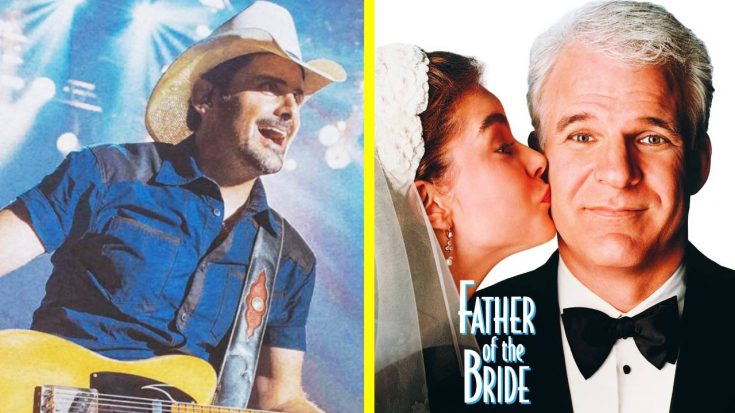 But as it turns out, there is a super-fan who claims there is “no one more excited” than him. That super-fan is country singer Brad Paisley, who just happens to be married to Kimberly Williams-Paisley, or Annie Banks-McKenzie in the films.

As it turns out, the Father Of The Bride movies have a huge part in why the Paisleys even started dating!

In 1991, the country singer took his then-girlfriend to see Father Of The Bride in theaters and after they broke up, he went to see the sequel by himself in 1995.

Apparently, Paisley couldn’t shake Williams out of his mind, and later told Good Housekeeping magazine in 2009 that he thought, “she seems like a great girl — smart and funny and all those things that are so hard to find.”

During a 2015 interview on the Meredith Vieria Show, Williams told the story of how she finally ended up meeting the country singer after he had adored her from afar for so long.

She said, “He swears, it had never happened before, he woke up one day and decided he wanted to call me.”

The actress says she eventually agreed to go out with Paisley and ended up appearing in his music video for the song “I’m Gonna Miss Her (The Fishin’ Song).” Turns out, Paisley’s instincts about Williams were right. They fell in love fast, and after eight months of dating, they were engaged.

Now, they’ve been married for 17 years and counting!

Technically, it is being called Father Of The Bride Part 3 (ish) and will benefit World Central Kitchen. It premieres Friday, September 25 at 6pm EST.

What are you doing friday night? We thought so. You are cordially invited to join the Banks family for…

Posted by Netflix on Wednesday, September 23, 2020

No wonder Paisley is so excited for Father Of The Bride Part 3 (ish)! He shared the promo on his Facebook page and said, “No one more excited about this than me…”

No one more excited about this than me…Tomorrow Netflix, YouTube and FacebookKimberly Williams-Paisley