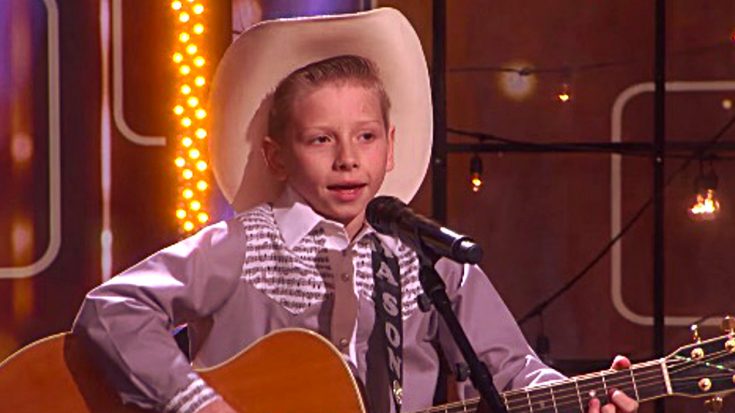 If you haven’t heard of Mason Ramsey by now, you must have been hibernating for the past few weeks. The 11-year-old country boy became an internet sensation when a video of him singing a Hank Williams song at Walmart went viral.

Since he yodeled in the song, he came to be known as the yodeling Walmart boy. There are dozens of videos of his performance, and many of those have millions of views.

The full video of the boy yodeling in Walmart. This kid is a legend ? pic.twitter.com/djhK55dqLF

But while Ramsey may be going viral now, he’s had some fame in his local community and online for years. You’ve probably seen the famous video where he serenades shoppers with a couple of Williams’ songs…all while sitting in the shopping cart.

If you haven’t seen that video, just check it out right here. It’s adorable as can be!

Ramsey brought that same adorable personality and his incredible talent to The Ellen DeGeneres Show during a recent appearance. Before he sang, he talked to DeGeneres about his first airplane ride, and sweetly explained the reason why he didn’t like sparkling water when he tried it.

As they chatted, DeGeneres asked Ramsey about some of his greatest hopes for the future, and he shared his desire to perform at the Grand Ole Opry. Considering how much he loves country music, that makes perfect sense!

After talking with DeGeneres for a while, Ramsey put on his cowboy hat, grabbed his guitar, and stood in front of the mic to sing Williams’ “Lovesick Blues.” He also knocked the socks off of everyone watching when he started to showcase his top-notch yodeling skills.

When Ramsey finished singing, DeGeneres joined him to praise his performance. Then, she surprised him with some exciting news that left him in tears. She had her people get in touch with the Opry, and informed Ramsey that he would soon be performing there!

As if that wasn’t surprising enough, DeGeneres also told Ramsey that Walmart was giving him a $15,000 scholarship to go to college!

Funny to think how all of this happened just because Ramsey decided to start singing in the store one day. We have a feeling that big things are in store for this kid!