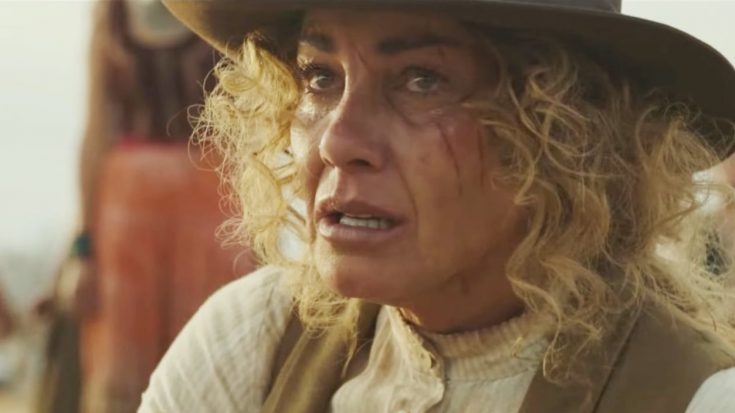 The finale of 1883 was released on Sunday (February 27). Faith Hill (who plays Margaret Dutton) told viewers they’d want to grab tissues, ice cream, and a warm blanket before settling in to watch the emotional episode.

We’re going to discuss the events of that episode here, so don’t keep reading if you don’t want to have anything spoiled for you.

Several characters died in the finale of 1883. We witnessed the deaths of some of the last remaining immigrants, who chose to stay behind in Wyoming rather than follow everyone else to Montana.

Josef’s wife, Risa, succumbed to her injuries after being bucked off her horse in Episode Nine. Josef survived and made it to Oregon, but his leg had to be amputated after he was bitten by a snake.

Captain Shea Brennan finally made it to the beach, which was his late wife Helen’s dream. The camera moved away as a gunshot rang out and Shea’s body fell.

After being shot in the liver with a Lakota arrow in Episode Nine, Elsa Dutton deteriorated due to an infection raging through her body. Some kind Crow Indians attempted to help her, but she did not get better.

Elsa died in her father James’ arms after selecting her own burial site. She picked a spot under a large tree on the land that will one day become the Duttons’ Yellowstone ranch.

Viewers were devastated over Elsa’s death. She had served as the show’s narrator, allowing us to see the world through her voice and eyes. People felt connected to her, her story, and her struggles.

Was there any way that Elsa could have survived? Faith Hill seems to think so.

During an interview with TV Line, Faith said she felt like her character, Margaret, may be partially to blame for Elsa’s death. Why does she feel that way?

If you recall, in Episode Nine Margaret asked Elsa to change into her last remaining dress. She made this request because she didn’t want Elsa to draw unwanted attention at the nearby fort for riding around in jeans and her Comanche vest.

As she was watching Episode Nine, Faith came to the shocking realization that Elsa’s life may have been spared if her mom never made her change her clothes:

“It didn’t even occur to me when I read the script,” Faith said. “I read it a million times. It didn’t occur to me even after we filmed it. It only occurred to me after I saw it: My God, it’s my fault she was shot and killed, because had she had her vest on that was meant to protect her, given to her by [her husband] Sam, maybe she could have survived.”

Faith wondered if the attacking Lakota warriors would have paused at the sight of Elsa in Comanche attire…not only saving her life but the lives of many of the pioneers. She also wondered if the vest would have been a more protective garment than Elsa’s dress.

After realizing how Margaret could have led to her daughter’s death, Faith said, “I turned to Tim [McGraw, who plays James Dutton], and I said, ‘My God, it’s my fault! It’s Margaret’s fault she’s shot!‘”

It’s nice to imagine what 1883 would have been like if Elsa had lived. But because of her death, her family gained a new life in Montana, where they established the ranch that will one day become John Dutton’s Yellowstone empire.