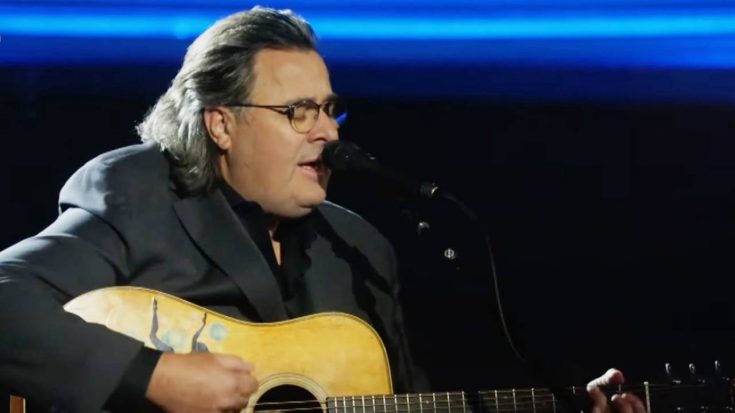 On May 30, 2021, PBS aired a special that paid tribute to all those who have lost their lives in service to our nation. The 2021 National Memorial Day Concert was hosted by Joe Mantegna and Gary Sinise and included performances from Alan Jackson, Sara Bareilles, Gladys Knight, Mickey Guyton, and Vince Gill.

Of course as country music fans, we are partial to the performances from Jackson and Gill. The two men each performed one of their iconic, and most emotional songs. Jackson sang “Where Were You (When The World Stopped Turning),” while Gill performed “Go Rest High On That Mountain.”

Gill began writing the song in 1988 after Keith Whitley passed away, but didn’t get around to finishing it until his brother, Bob, died in 1993 from a heart attack. He released it on August 28, 1995 with Ricky Skaggs and Patty Loveless singing background.

“Go Rest High” went on to win Song of the Year at the CMA Awards and Best Male Country Vocal Performance as well as Best Country Song at the Grammy Awards. While it never hit number one on the charts, it is a special song to so many, having been played at countless funerals and memorials.

Sitting on the stage at the Ryman Auditorium, Gill started singing his song that always brings a tear to our eyes. In the middle, footage of military funerals and families visiting their loved ones flashed across the screen, making it an even more emotional moment.

We’re not sure how Vince continues to sing this song over and over after all these years. We’d be a puddle of tears each and every time. Watch his incredible performance below.